Just as everyone expected, this game will decide the East division champion.

Missouri smashed a lot of people's expectations by winning the East division a year ago. It can show that it wasn't a fluke by winning this game and taking the division again, given that the Tigers returned so few starters from 2013's veteran team. It's been a roller coaster ride throughout the season, but it's heading back upwards at the right time. 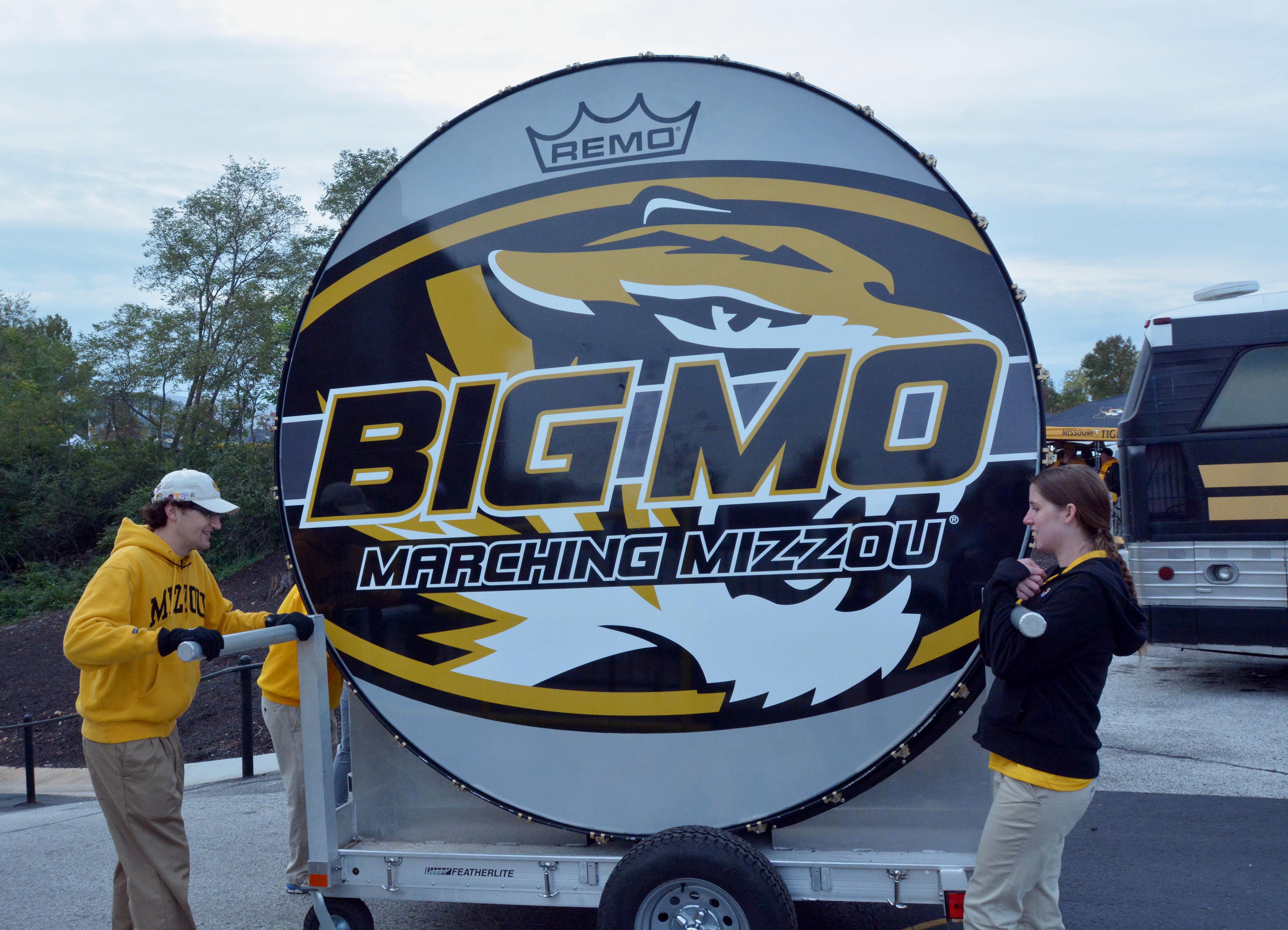 Arkansas may be playing for pride right now, but what pride it is they're showing. After losing 17 consecutive SEC games, the Razorbacks have won two straight and are playing for a third to closeout 2014's regular season on a real winning streak. Those two wins were shutouts, no less, and another could be on the table today against one of the SEC's lesser offenses. The abject disaster that was the Razorback defense from a year ago seems like a distant memory now, and Bret Bielema's power offense is just bulling its way through opponents right now.

The teams appear to come to this game from very different positions, from it being the East leader against the West's last place team to the old school Bret Bielema attack opposite Gary Pinkel's spread. Despite that apparent image, both teams will be approaching this one with a defense-first mentality. The first team to 20 points may well be the one that takes this game. These teams might not be old time SEC schools, but it'll be a throwback game in this way for sure.

1A New Series. Conference realignment has played havoc with rivalries, with some teams ending up in new conferences without sworn enemies. The Arkansas-LSU matchup was supposed to turn into a real rivalry, complete with a goofy trophy, but it never totally took. Missouri has been playing former Big 12 mate Texas A&M each year in conference play, but they weren't rivals in their old league. The SEC changed up things over the offseason to form the Battle Line Rivalry between these schools, but it's going to take some time. Despite sharing a border, the Razorbacks and Tigers have played each other just five times. Settle in for the long haul, guys, and maybe this one will turn into something.

2TGIF. Arkansas is no stranger to playing on the Friday after Thanksgiving, as its series with LSU inhabited this day from the introduction of the Golden Boot in 1996 until last year (except for 2009-10 when the Iron Bowl got the day to itself). For this year at least, the Razorbacks get to work off their turkey a day earlier than most of the rest of the SEC again. It's a new feeling for Missouri, which typically rooted for the meteor while watching Colorado-Nebraska on this day in the Big 12 and Nebraska-Oklahoma in the Big 8 before that. No game has been selected for Thanksgiving Friday for 2015 yet, but this could be a trial run for giving the SEC's newest rivalry its own special day.

3Questions at Quarterback. Brandon Allen missed more than half of Arkansas's victory over Ole Miss last week, but his younger brother Austin Allen entered the game and filled in ably. Austin completed three of five passes, including strikes of 28 yards and 33 yards, but he did take two sacks and lose a fumble. Brandon has been practicing and likely will go, but Missouri's pass rushers Shane Ray and Markus Golden could aggravate the injury and necessitate Austin coming back in. On the other side of the ball, Maty Mauk escaped his horrible October with a solid November so far. Still though, his only game with a decent passing efficiency was last week against Tennessee (151.5), but he completed fewer than half of his passes. Mizzou averages an interception per game in SEC play while Arkansas is just under, but there could be opportunities for more than that today. 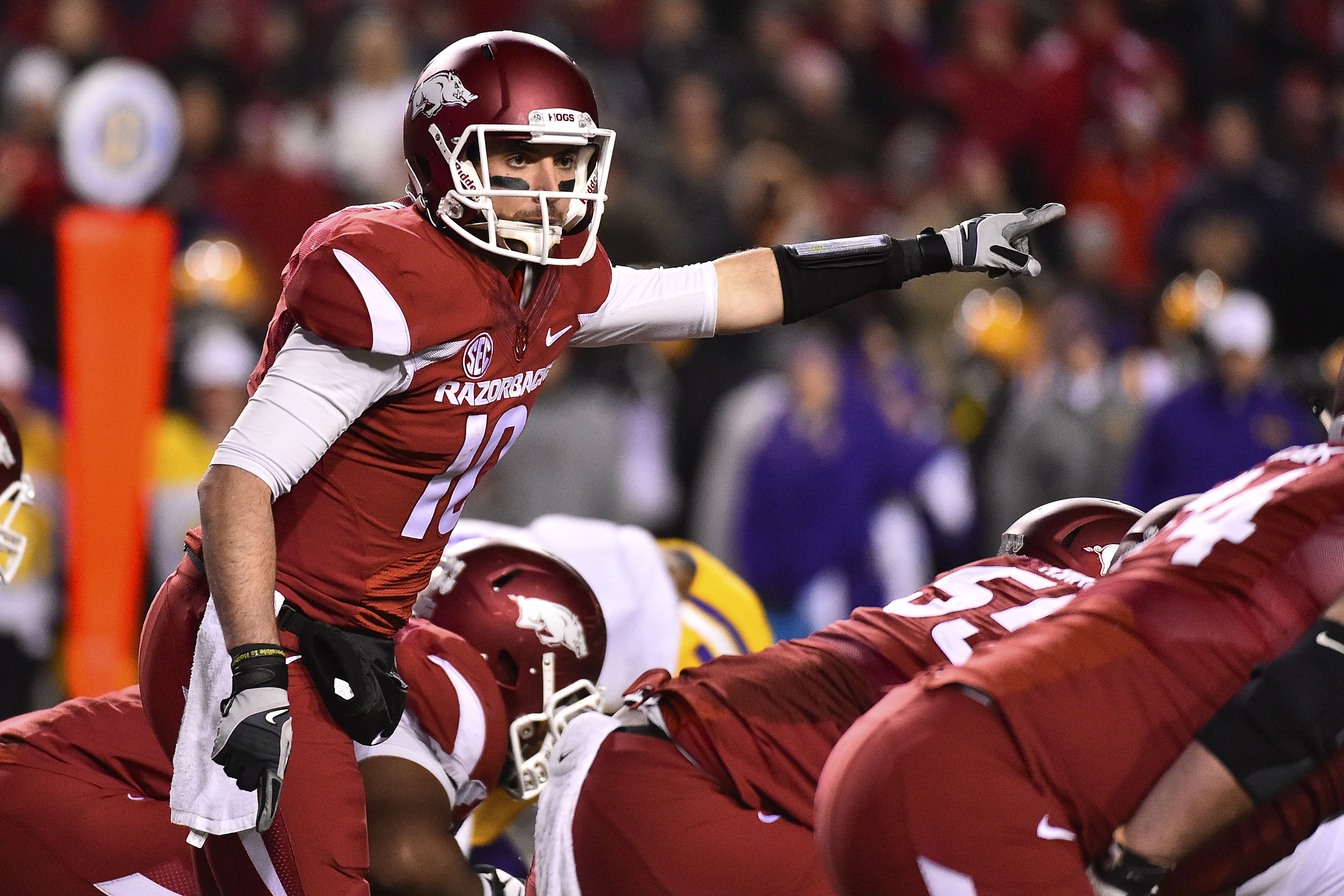 4On the run. No preview of an Arkansas game is complete without a discussion of how the opposing defense will fare against Bielema's power rushing attack. The Tigers have only allowed over four yards per carry twice this year, against Toledo and Indiana. The next-highest to those was Texas A&M. In other words, the team's most generous rush defense performances came against spread, rather than traditional, offenses. Even the Georgia debacle didn't crack the top three here, though it was fourth. Nick Chubb did rack up 143 yards in that game, but he needed 38 carries to get there. For Missouri to feel good in this one, something in the low 3 YPC range will probably do. Forcing an Allen brother to have to win the game is the best bet, and the Tigers might have a shot at getting there.

5What's my motivation? My working thesis throughout is that both teams will come out fully motivated and well prepared to go. It may or may not be the case. Sure Arkansas is on a roll, but securing bowl eligibility last week might leave the team feeling satisfied like it accomplished something. Missouri has the East title on the line in front of a home crowd, so motivation isn't an issue. What could be an issue though is players putting too much pressure on themselves to seal the divisional deal and not mess this up. Arkansas could come out flat and get pasted by a fully ready Mizzou team. Arkansas could come out loose and steamroll a tight Tiger team that can't just let it rip. Hopefully we'll get to see the best of both teams, but it's not a guarantee.

Marcus Murphy, RB, Missouri: The Tigers' second-leading rusher is solid, if unspectacular, as a ball carrier. He'll churn out some yards, but he doesn't have a run of at least 30 yards on the season. That fact is ironic, considering he's one of the best return men in the conference. Arkansas has the worst kickoff coverage unit in the conference, and Murphy already has a pair of touchdowns on kickoffs this year. In a game where points will be at a premium, Murphy could make a big impact in special teams.

Hunter Henry, TE, Arkansas: Missouri's pass defense is solid enough, but it has a tendency of letting one particular target have a good day while locking down most everyone else. Henry is the second-leading receiver for the Hogs, and he could end up the guy who breaks loose against the Tigers. He had 92 yards on Georgia and 107 on Mississippi State, so he's already shown up big in big games. A similar effort today could put the Razorbacks over the top.

Shane Ray, DE, Missouri: Ray has been a terror this year, setting up camp in opponents' backfields. He's a complete player, leading the SEC in both sacks and tackles for loss. It'll be a taxing day going up against the enormous Arkansas offensive line, but he should be up to the task. He likely won't get too many chances to rush a pure drop back play, but when he does, someone named Allen has a decent shot of ending up on his back one way or another.

Brandon: This is one of those games that could go either way. All things being equal on a neutral field, I would give the slightest advantage to Arkansas. But the game is at Missouri, and the SEC East title is on the line. And if there's one thing we've learned about the Tigers over the last two seasons, it's that they win when they have to. Missouri 23, Arkansas 21