The Tigers' attack depends on the kind of precision and timing that comes from playing regularly, something Auburn hasn't done in a month. Will that hurt them tonight?

For all the talk of advanced statistics in college football nowadays, the top line results still tend to stick with us. And so when you bring up the 2010 BCS National Championship Game, what people usually remember is that the offenses didn't do that well. Which is only kinda true. The fact of the matter is that the two offenses combined for almost 1,000 yards, but they scored just 41 points; there were slow points of the game and Auburn and Oregon had trouble capitalizing on their ability to move the ball, but move they ball they did.

If there's one that would worry me as an Auburn fan with tonight's game against Florida State looming, though, it is something else from that game. But no means is 519 or 6.11 yards a play anything to scoff at, but it was almost 1.5 yards lower on a per-play basis than Auburn generated in its other 13 games that season. You could probably write a week's worth of posts breaking down exactly why that happened, but one suspect sticks out: The layoff.

Gus Malzahn's offense, after all, is built on timing, the ability to move the ball around and deception. The idea is to make sure that the defense doesn't know where the ball is, or force the defense to make decisions that will then determine where the ball goes. It's not a straight triple-option offense, or even a true triple-option, regardless of what Gary Danielson says. But it does have some of the same requirements in terms of precision and execution -- which gets better with time and reps and continuing to play. Something that Auburn hadn't done in more than a month in 2010, and will not have done in about a month when they take the field tonight. Malzahn himself spoke about that a little bit on Sunday.

You're playing really good football and then you have a 30‑day layoff, and there's a lot of challenges that go with that. We saw some of that in 2010. Hopefully I can use that experience to get us off to a faster start

But was 2010 a sign that Malzahn's offense struggles after a layoff? Was it an exception or the rule? Once again, the answer appears to be somewhere in the middle. Here's a look at Malzahn's offense during the regular seasons for his years as offensive coordinators, and what those teams did in the bowl games that followed those seasons. 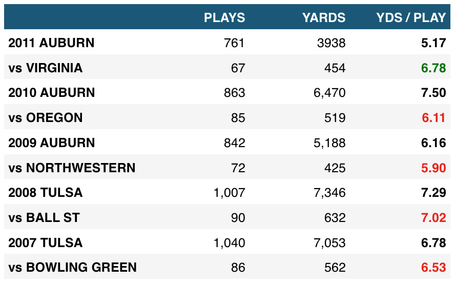 I didn't include Arkansas' 2006 team, because most of the key figures involved in that agree that Houston Nutt didn't go all-in with Malzahn's offense that year. And I left off Malzahn's year as head coach at Arkansas State, because he didn't stick around for the bowl game that year. These are the years when Malzahn had significant control over the offense during the regular season and during the bowl game.

What leaps out is that, with the notable exception of the 2011 Chick-fil-A Bowl against Virginia, Malzahn's offense has experienced a drop in per-play production in the bowl game every year. The flip side of this is that these aren't major swings in production that we're talking about here. For example, the 0.26 yard per play drop in 2009 translates to less than 19 yards lost over the course of the game. That's not going to make or break much of anything, particularly when you consider it's probably two or three yards a drive, at most.

But as I mentioned earlier, the number was pretty significant in 2010. There, the loss of per-play yardage works out to more than 100 yards during the game. That kind of lost yardage will change the outcome, or at least could. It's just not what we normally see out of Malzahn.

It may be that Florida State has worked out a defensive game plan that will work as well against Auburn this year as Oregon's did in 2010. And then it will come down to a question of whether Auburn's defense is up to the task of shutting down the Seminoles the same way its counterpart shut down the Ducks three years ago (I doubt it). If Malzahan's offense follows the rule, it should be alright. But if tonight's game proves to be another exception, the Tigers could be in some real trouble.