Who Has Benefitted Most From the ACC in the BCS?

One of these conferences is not like the others.

Share All sharing options for: Who Has Benefitted Most From the ACC in the BCS?

Wyoming football put out a tweet earlier today that charts the winning percentages for conferences in BCS play, noting that the MWC leads overall:

Which, whatever. Some stats are more malleable than others, and this is one that you can bend to say nearly anything you want it to say.

I used the "nearly" hedge word there because what you can't make it say is that ACC teams have been good at winning BCS games. That conference's teams bring up the rear by a long shot, with them having a combined 3-14 record in BCS play so far. Well, except for the MAC (0-1) and independents (read: Notre Dame, 0-4), who haven't won a game.

When one data point is way out of line with others, it naturally makes me think that it could be skewing things. So, I decided to take games against ACC teams out of the other conferences' aggregate records to see how it changes things. I replicated Wyoming's chart using the exact same terms it used. Conference affiliation at time of game is what matters, so 2001 Miami (FL) is Big East and 2004 and 2008 Utah are MWC. 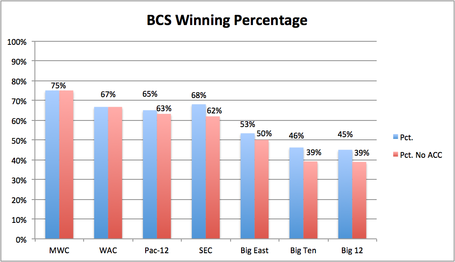 Note: Wyoming apparently used either this or Wikipedia as its source, neither of which include the BCS games that followed the 2012 season in their conference records table. I used that as the source as well to keep consistency, so this chart and the figures below don't include the January, 2013 games either.

The MWC and WAC figures don't change, as they've not faced an ACC team (and won't ever in the case of the WAC, R.I.P.). The Big Ten's aggregate winning percentage falls the most without the ACC, with the SEC and Big 12's percentages falling the same amount (rounding makes the percentages off by one, but they're the same).

Of course, that chart is misleading by design. Wyoming made it to put the MWC in the most flattering light. Here is what the records look like, in order of appearances in BCS games:

The ultimate point to this, if there is any, is that we probably shouldn't pay too much heed to mere conference winning percentage in BCS games. All of the games except one per year are exhibitions, after all, and there is a history of teams no-showing when they were disappointed they didn't play for the national title. Also, don't bet on ACC teams to win BCS games against any of the other major conferences next winter.