After a 17-0 start turned into a tough beginning for the conference slate, there was reason to question whether the Bulldogs were as good as advertised. And then came the postseason

For a while, it looked like the preseason Top 5 ranking might hold up for Mississippi State's baseball team. The Western Division Bulldogs started out 17-0, though the strength of schedule was dubious with less than a week to go until conference play began. Then, the roof fell in.

The day after beating Central Arkansas to get to 17-0, Mississippi State turned around and dropped the first of two straight losses to the Bears. They would lose two of three games in each of their first three conference series. Mississippi State eventually recovered, but they were not the kind of team that looked poised for a deep postseason run as the regular season came to a close. 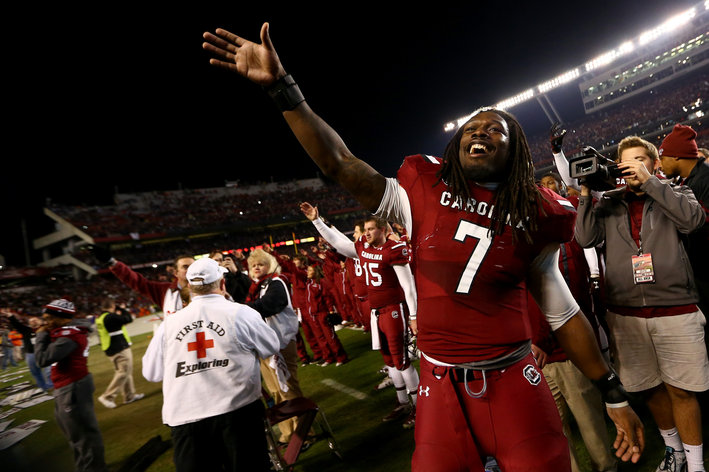 No. 10: Jadeveon Clowney's Season Under the Spotlight

Then, Mississippi State ended the SEC tournament one game away from the title game. And just like that, they were off. From the beginning of the conference playoff on May 21 until the end of the pre-championship rounds of the College World Series a month later, the Bulldogs would lose two of 13 games. And they did it in one of the most unconventional ways you could imagine.

Put simply, Mississippi State really didn't have starting pitchers in 2013. Sure, they had pitchers who would start the game on the mound, but that was mostly because the rules of baseball require it. These were not starting pitchers in the conventional sense, guys who were sent out there to pitch for at least five and hopefully seven innings to set up the bullpen.

Instead, the pitchers that Mississippi State relied on were in the bullpen. Sometimes a starting pitcher would get pulled at the first sign of trouble. Lengthy outings were rare, and at times seemed almost undesirable. Given a choice, John Cohen would just as soon have the ball in the hands of the bullpen rather than the starting staff.

But it worked. The Bulldogs plowed their way through the Starkville Regional, then knocked out Virginia in the Charlottesville Super Regional in a game that, in a way, lasted almost an entire day. They won their side of the College World Series bracket in Omaha. And then, they didn't win anymore.

Two straight losses to UCLA -- one of them close, one of them not -- dashed Mississippi State's hopes of winning its first national championship in the sport. But the Bulldogs had already gotten far deeper into the postseason than anyone thought they would at that point. And it even seems a bit much to say Mississippi State fell short of its goals, given that they came so close to succeeding, and given what they did to that point.

"This group's special, and what they've done is, they've really helped the future of our program," Cohen said after the Bulldogs' final loss to UCLA. If that was the story of 2013 for Mississippi State baseball, the story of 2014 will see how far the Bulldogs can go now.