If the Tigers do manage to pull the upset Saturday, should they be in the national title conversation regardless of what happens to Ohio State?

I was on the radio Tuesday morning ... well, wait. Let's do a little experiment first, and then I'll tell you how I got to thinking about it.

The title of this post probably gives it away for anyone following the college football season so far, but play along even if you've figured it out. Take a look at the chart below, and tell me which one of these teams you think has had the best season so far.

It's not an easy call, is it? One team has the stronger margin of victory, but has played a substantially weaker grade of opponent on average, at least according to Sagarin's rankings. (And those are his really rankings, not the ones he submits to the BCS.)

In case you haven't guessed by now, Team A is Ohio State. Team B is Auburn. One of them is likely to play in the national championship game if Alabama loses between now and the end of the season; one of them is not. And even if that loss comes Saturday against Auburn, the Tigers are probably not the team that will take on Florida State for the crystal football.

I put that chart together, and a few others I'll throw out here in a minute, after I spent some time Tuesday morning on the radio with the crew over at 3WL 1350 AM in New Orleans. I was prepared for many of the questions they asked me -- they had invited me on to talk about rivalry weekend, so I knew the teams that were likely going to be the focus of the program -- but there was one that caught me a little off guard, along the lines of: Does Auburn deserve to go to the national championship game more than Ohio State if both win out?

It's not that I hadn't heard the question before this season, but I considered it (and still do consider it) an academic question. If Ohio State wins out and Auburn wins out -- taking down Alabama's SEC hopes along with it -- Ohio State will go to the championship game. Why? Because it's an undefeated team in an AQ league, and voters don't leave an undefeated team in an AQ league out of the title game unless there are more than two.

You can look at that chart and see there's a gap between the two schedules, but it's hard to tell just how large that gap is. So let's do something different, color-coding things and looking at it through both Sagarin and F/+. 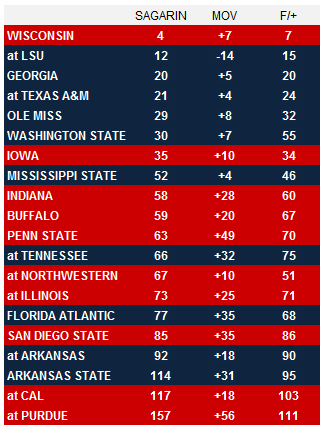 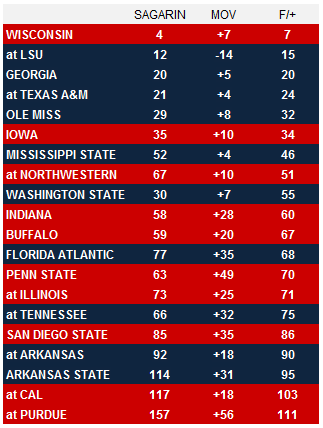 In fairness, Ohio State does have the hardest game for either team. But, after that, Auburn has another four or five games (depending on which measure you're using) before Ohio State's next most difficult game. Again, how much do you value raw schedule strength and how much do you account for style points?

How much will the remainder of the schedule change the disparity for these teams? Not a whole heck of a lot. Michigan is 46th in Sagarin, 38th in F/+, while eventual B1G Championship Game opponent Michigan State is 15th and 14th, respectively. Auburn plays Alabama (2, 1) followed by either Missouri (8, 12) or South Carolina (18, 17). And while those numbers will shift around a bit before the season is over, the rankings of Ohio State's entire schedule currently average out to 64.9 in Sagarin and 59.3 in F/+, while Auburn's would clock in at 43.6 and 44.4, respectively. (With South Carolina in the SEC Championship Game, 44.4 and 44.8.)

Of course, there's a simple response to all this: Don't lose by two touchdowns to LSU in late September. Anyone who's read this blog for any length of time knows that I generally say that, at least under the current system, the only team that has a real right to complain is a team that goes undefeated and gets locked out of the BCS title game. For AQ teams in particular, the goal is clear: Win every game on your schedule and you've got a decent chance; lose somewhere along the way and you're going to need a good deal of help.

On the other hand, if Auburn wins out and either Florida State or Ohio State also loses somewhere along the way, it's pretty clear that Auburn has a compelling case for being the other contender in the national championship game. This isn't over for the Tigers by any stretch.

Still, do they deserve to go to the national title game ahead of Ohio State even if the Buckeyes win out? That depends on your perspective. I think there's a case to be made, and I'm not sure there's a right or wrong answer. It might be a moot question, but there's only way for Auburn to try to make it matter -- and that's to win Saturday.