Also: What do we make of the injury to Aaron Murray? Is there still a chance for an SEC player to grab the sport's biggest individual award? And where is everybody going in the postseason?

Share All sharing options for: Topics for Discussion: The Increasing Temperature of Muschamp's Seat; Title Game

Does the Georgia Southern upset change things for Will Muschamp? I hate to keep bringing this up every week, but the Florida head coach keeps giving me a reason to bring it up. This week, the reason is a 26-20 loss to Georgia Southern, believed to be the only FCS team to ever beat the Gators. Sure, the administration has been making all the right statements about bringing Muschamp back for at least one more season -- but that was before Saturday's debacle. What are the odds that Florida sticks with Muschamp after the season? Can they? 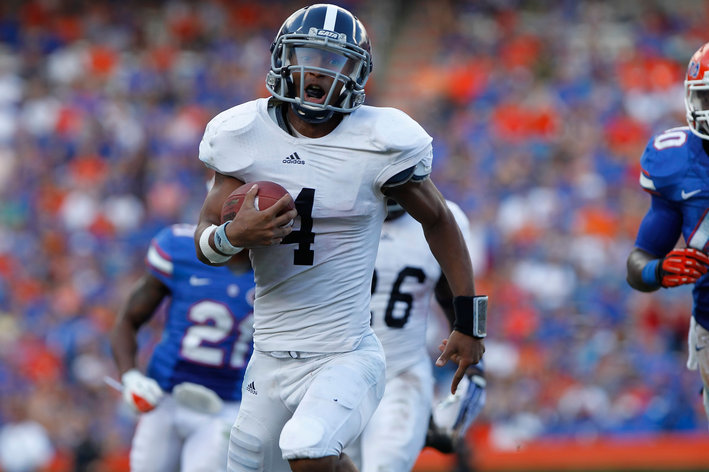 In one of the most surprising losses of the season, Florida was defeated at home by a team from the FCS

What effect does the Aaron Murray injury have on Georgia? The Bulldogs still have to play Georgia Tech next week in the season finale, and then go to a bowl game (probably somewhere between the Gator Bowl and the Outback Bowl) where they could face either a B1G or another ACC team. Murray appears likely to be out for at least the regular-season finale. Is there any chance that Georgia won't be able to defeat the Yellow Jackets even without their quarterback leader? Can they beat a mid- to upper-tier bowl opponent? And if Murray is done, what is his legacy for Georgia and the SEC?

Who wins each of the conference's divisions? Both tickets to the championship event are still up in the air as we head to the final week. This essentially comes to what you think the results will be in two games. Alabama and Auburn square off with the SEC West spot in Atlanta up for grabs; it's a win-and-in situation for both teams. If Missouri beats Texas A&M, then the Tigers will be headed to the SEC Championship Game as the SEC East representative in just their second season in the conference. But if the Aggies pull off the win, it will be South Carolina making its second appearance in the title bout. So who's going to play in the Georgia Dome in two weeks?

Will an SEC player win the Heisman Trophy this year? Johnny Manziel had one of his worst games at the worst possible time to basically remove his name from Heisman consideration. Some consideration is starting to flow toward AJ McCarron in a sort of lifetime achievement award for his two and possible three national championship rings as starting quarterback. Does that mean the Alabama signal-caller is the conference's last hope to take home the award? Or is there another SEC player who might emerge in the final game or two to claim the hardware?

Bowl projections: Take a stab at it. Here's the order when it comes to the SEC and bowl games: BCS, BCS (if selected), Capital One, Outback (East), Cotton (West), Chick-fil-A, Gator, Music City, Liberty/Compass (those two select "in consultation with the league office") and Advocare V100. The Outback and the Cotton can pick a team from the other division, but they have to wait on that division's bowl to choose first. (In other words, the Outback has to wait for the Cotton to pick a team from the West before it can do so, and vice versa.) So who do you think goes where?