Topics for Discussion: The Iron Bowl Will Be Massive, and the SEC East Isn't Settled Yet

Plus: Which coaches might be moving on -- willingly or unwillingly -- after the season is done? Were any of the contenders disappointing on Saturday? And where is your team going to spend the postseason?

Share All sharing options for: Topics for Discussion: The Iron Bowl Will Be Massive, and the SEC East Isn't Settled Yet

IRON BOWL OF THE CENTURY: Who ya got? It looks we're going to get the Iron Bowl that everyone kind of wanted, with Auburn and Alabama showing off with the SEC West and, barring the upset of all time when Alabama plays Chattanooga, the Tide's hopes of playing for the national title both on the line. There will be two weeks of hype leading up to this one, but let's go ahead and gets started anyway. Does Auburn stand a chance in this game? Where would you set the line? 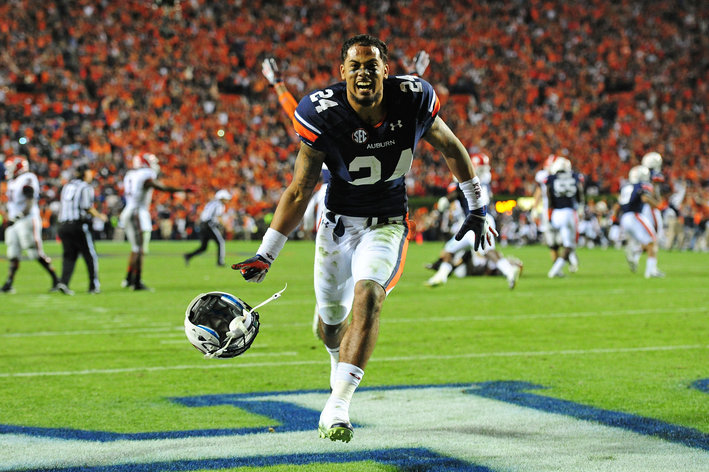 The Tigers survived the trip to Georgia after an insane fourth quarter, keeping both division races open in the process

Who wins the SEC East? This is really just a simpler way of saying: Do you think that Mizzou sweeps at Ole Miss and against Texas A&M? With Auburn's win against Georgia and South Carolina's heart-sopping victory against Florida, a loss by Missouri to either of its final SEC opponents means that the Gamecocks will take the division; a win against both of them means the other other Tigers will get to the Georgia Dome in record time for a new SEC member. So do you think that Mizzou can finish up the season on a high note? Or is it too much to ask them to take away Dr. Bo's scalpel and cancel the Johnny Manziel Show?

Were you disappointed by any of the "contenders" this weekend? South Carolina needed another late comeback to win against Florida. Auburn needed miracle touchdown to keep from blowing a 20-point lead against Georgia. Alabama spent the fourth quarter trying to give the game away against Mississippi State. (Missouri was on a bye.) Are any of those games a sign that one of the contenders is more vulnerable than we think? Or can the closer-than-expected games be explained away by the circumstances of each?

Most likely to have the same job next year: James Franklin, Dan Mullen or Will Muschamp? Florida athletics director Jeremy Foley has said he's "1,000 percent" committed to Muschamp for next year. Does that hold if the Gators end up 5-7, as now seems likely? What about the former Florida offensive coordinator currently leading Mississippi State to what could be a bowl-less season? And is there any reason to believe that Vanderbilt will be able to fend off the line of deep-pocketed programs that could be gunning for Franklin?

Bowl projections. Let's bring it home this week: Where do you think your team will go, and where would you like it to go? Do you have any team that you would prefer to face from the other conference in that bowl?