Topics for Discussion: An Important Iron Bowl and Which Coaches Are Coming and Going?

Also open for your comments: Where would one of the conference's best quarterbacks be without his best wide receiver? Who's going to a bowl?

Share All sharing options for: Topics for Discussion: An Important Iron Bowl and Which Coaches Are Coming and Going?

Are we going to get the earth-shattering Iron Bowl? Alabama and Auburn can set up the most important edition of the rivalry in years, maybe decades, if they can both just get to the game without another loss. The Tide has to travel to Starkville and take care of Chattanooga at home to make it; Auburn needs only a home win against Georgia to get there. Do you think they can make it? And how good a chance do you think Auburn would have in that game? 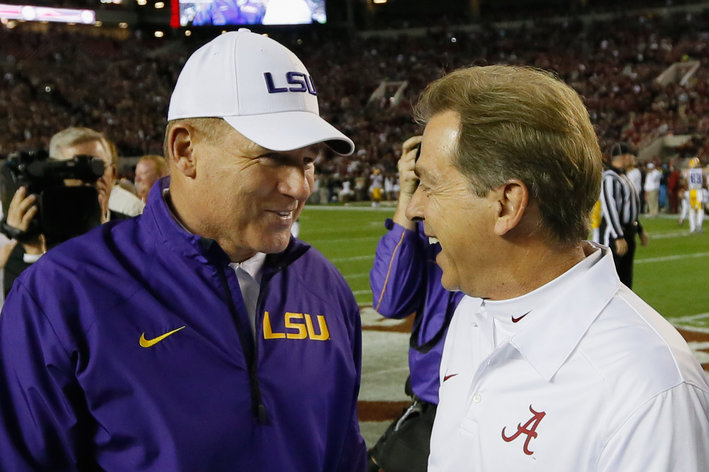 Nick Saban pulled some tricks out of his own hat to beat LSU. Now, can he get the Tide through the rest of the season without a loss?

Johnny Manziel without Mike Evans this year: Discuss. As good as Manziel has been this year -- and he's been maybe even better than he was last year -- you have to wonder if he might not be quite as good if Evans hadn't been around to catch the ball. Evans grabbed another five receptions for 116 yards Saturday, bringing his total receiving yardage to 1,263 -- more than twice as much as any other receiver on the roster. And some of his catches have been of the circus variety. So would Manziel still be the same quarterback without Evans? Would Evans be the same receiver without Manziel?

What are the chances that James Franklin and Kevin Sumlin are still around next season? Both the Vanderbilt head coach and the Texas A&M leader have been mentioned for a variety of jobs in recent months, with the semi-vacant Southern Cal head coaching position being the most prominent. Saturday's win against Florida almost certainly increased Franklin's stock among supporters in Los Angeles, Austin and elsewhere. So do you think both of these guys are still at their current institutions when February rolls around? Or could one or both of them be headed for greener pastures?

Is there any way that Will Muschamp survives? Before Saturday, I was among those who were very, very skeptical that Muschamp was going to be shown the door after the 2013 season. Now, I'm somewhat skeptical that he will still be in Gainesville after the 2013 season. You can toss out all the statistics about this game and how Vanderbilt's total yardage wasn't all that high or whatever -- the Commodores hadn't won in Gainesville since shortly after World War II, and they beat Florida 34-17. Why in the world would the Gators keep Muschamp?

Which of these teams will make bowls? Here are your teams who have not either clinched bowl eligibility or locked up a losing season: Vanderbilt (5-4; Kentucky, at Tennessee, Wake Forest remaining); Mississippi State (4-5; Alabama, at Arkansas, Ole Miss remaining); Florida (4-5; at South Carolina, Georgia Southern, Florida State remaining); and Tennessee (4-6; Vanderbilt, at Kentucky remaining). All of them technically can get to the postseason, but which ones do you think will actually make it?