As expected, some of the SEC teams took a bit of a tumble after losing to underdogs. A look at the fallout

You had to know that the fallout in the polls for the SEC after Saturday's upset special was not going to be pretty. And it wasn't. Although, from the looks of things, at least some of the pollsters are as confused as we are. And the coaches, per usual, have taken leave of their senses completely. Let's get to it.

First, the relatively sane poll with the pretty table. The AP:

Maybe it's just me. Maybe it's SEC homerism or my hatred of Clemson. But when a team gets dismantled by 37 points at home after scoring a garbage-time touchdown and its only other win of any real note is beating a (far healthier) Georgia team by one fewer point than Vanderbilt did, that doesn't scream "Top 10" to me. But, again, maybe that's just me.

Results and analysis from Week 8 in the SEC 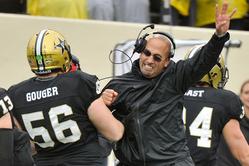 As for the SEC, Alabama and Missouri are the only Top 10 teams left after this Saturday's debacle, though Auburn is very close. I guess they're not Top 10 material because their loss is by 14 points on the road. You gotta get beat by five touchdowns to be truly elite. LSU -- which is ranked below Auburn for some reason -- Texas A&M and South Carolina all drop by at least seven places, with the Gamecocks plunging nine spots. And that's it. Georgia and Florida both drop out, and Ole Miss' win against LSU isn't enough to get into the poll yet.

Still, that's six SEC teams in the Top 25, compared to four for the ACC, four for the B1G, four for the Big 12, three for the Pac-12, and two for the American Athletic Conference. Fresno State and Northern Illinois are your non-AQ teams. Yes, the Pac-12 is clearly the better conference, given that it only has half as many Top 25 teams as the SEC.

Ah, yes, there's Auburn, sitting two spots below the team it just beat. On the road. But it could be worse, Tigers. You could be like UCF, and be ranked nine places below the team you just beat on the road, for no discernible reason. (The AP made the same mistake, but at least it's only a three-spot gap in that case.) Missouri, which has yet to beat  a team by less than 15 points, is behind Miami (FL), which almost lost to UNC on Thursday, because -- well, because Miami was ranked ahead of Missouri last week. But I'm sure the coaches thought very hard about this and can give you a better reason.

But, again, only 43 percent of SEC teams are ranked here in the top quarter of the nation. Clearly, this is a down year for the conference.