Again, fewer giant swings this week -- just two in the double digits, and many of the shifts are of the two- or three-spot variety. There are still some problems from the fact that there are some teams who have only played two FBS teams and some teams that have played four, but even that's starting to even out a bit as more teams consume their FCS cupcakes and the teams that have already done that head into the meat of the schedule. Also, as there are more games rolling onto the schedule, the gap in the number of teams becomes less and less important -- though it's still significant.

Explanations and charts, as always, are after the jump.

Yes, I'm pretty impressed by what the Wildcats have managed to do. They defeated Oklahoma, which I think is a better team than represented here because they haven't beaten anyone yet. If Oklahoma ends up being worse than I think, then that win will start to be more of a drag on Kansas State's strength of schedule, and they'll move back down. The Miami blowout also buoys the Wildcats' resume, but not quite as much as Alabama's solid case for being No. 1. Florida's record got a bit stronger with the win against Kentucky -- but not enough stronger to hold off the Wildcats at the moment. Yes, I dinged LSU a little bit for the weakness of their win against Auburn -- but only because there are so few other games to rely on. (I also probably shouldn't have put them ahead of Florida last week, as a couple of people noted in the comments.) As the wins everyone expects to pile up continue to pile up, LSU will likely move back up.

I would think most of this is pretty self-explanatory. All of these teams are undefeated and have either a win over an expected BCS contender or a rout of a mid-tier BCS team. Florida State would be a lot higher now if it weren't for the two FCS teams they've played. Is that all their fault? No, but it's no less their fault than when Boise can't get more major teams to play them, and I always hold that against them anyway. Good for the goose, good for the gander.

Oregon State only has two FBS wins right now, but they're pretty decent wins in UCLA and Wisconsin. Ohio State's near-loss to UAB scared me a little bit. Louisville might be a bit high here, but there aren't exactly a ton of qualified candidates. Same for Northwestern. Teams like Clemson and the like will probably be back, at which point these teams will move further down the ballot to where they "should" be.

Ooh, the one-loss teams are starting to show up. Southern Cal has a few okay wins that are starting to move them back up the ballot, while UCLA is going the other way after its first loss. The other three are new teams that are undefeated, but that I still can't quite make heads or tails of. They don't have overwhelming wins, but enough solid wins to give them some credit for now.

No, the Oregon loss didn't quite move Arizona completely off the ballot, but nearly did. Really, the choices below them aren't much better on the win side and have their own hard-to-explain or ugly losses. The rest of these teams are undefeated but, again, don't have a ton of stellar wins in their collections. Several of them are likely to hang around, but whether they're going to move up significantly is another question. Ohio is going to have trouble getting into the Top 20 without even more surprising results from the MAC. 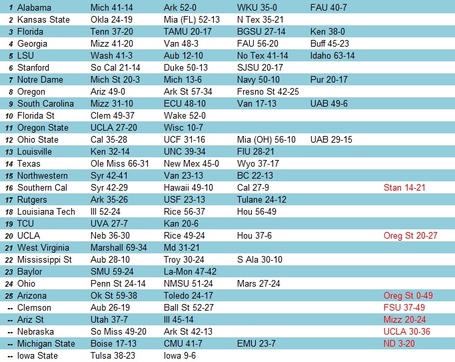