BlogPoll Ballot: Plowing Ahead With a Slowly Normalizing Ballot

Share All sharing options for: BlogPoll Ballot: Plowing Ahead With a Slowly Normalizing Ballot

Yeah, I know almost no one agrees with me on the way the ballot has gone up until now -- but it's normalizing somewhat. Onward.

A couple of points before we get into the team-by-team defense of the ballot:

Yeah, this kind of has a historical feel to it, doesn't it? Alabama has just hammered the tar out of every team that's decided to play the Tide, so they're an easy choice for first place. LSU has also waxed most of their opponents, but that's a far less distinguished list. Florida has carded two wins over BCS teams, including the romp against Tennessee, but the Gators could start moving down the chart as their SOS weakens a bit. (Yeah, they play LSU in a couple of weeks, but they've got Kentucky and Vanderbilt sandwiched around that.) Stanford gets a bump for beating Southern Cal and answering a lot of the questions people had about how high I had them last week, and Notre Dame's win over Michigan State gives it a win over a respectable team.

This is what happens when you play cupcakes: You might move down if other teams' resumes pass yours. Georgia's going to move up if they just keep winning; I'm not sure Kansas State can keep winning, which would obviously not allow them to move up. Texas might be a bit too high; I'm open to suggestions about whether to place them lower. None of Northwestern's wins have been all that impressive, but the Wildcats are the only team that's played three BCS opponents, which counts. I probably had Ohio State a bit too low before, so don't be alarmed by their jump this week. Besides, their ranking should start to drop as they get out of the MAC and Pac-12 portion of their schedule and start to play B1G teams.

UCLA can only go so far on one win, though that could change once they get into the conference schedule. Maybe my anti-homerism was getting the best of me, and I heard a few complaints, but I'm blaming this change if South Carolina can't beat Missouri this weekend. Arizona moves down a bit, based in part on the diminishing value of clobbering Oklahoma State and in part on the feedback I heard that they were too high last week. Louisville's win against UNC moves them back into the poll, but 14 might be a little bit too high. Ohio moves up largely because of teams whose resumes aren't improving as all, because they're either losing or playing FCS teams.

Clemson and Mississippi State are starting to feel the Auburn swoon a little bit here. The other teams are mostly just not playing anyone that adds to their resume at all. Once they do, they'll move pretty far up the ballot pretty quickly. Patience.

Where to put the one-loss teams was one of the harder calls on this week's ballot. It wasn't really intentional that they ended up 23, 24 and 25 -- in fact, there are a few teams below them out of those that I considered. That's just where they ended up. But I do penalize teams for having a loss this early, so that's why they're not higher right now. As other teams lose, some of these teams and the also-rans will end up making the last few big leaps before this starts to look more "normal."

What did I get wrong? 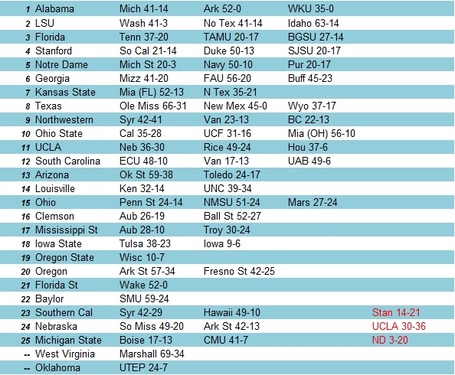