Share All sharing options for: Football APR Scores Broken Down by Conference

I'm not convinced the APR is all that good a measure of academic progress, but if you put a fresh data set in front of me, I instinctively begin making charts. So, here are the APR scores for each of the football programs of the schools in BCS conferences.

A few notes first. The APR scores are through the 2010-11 school year, so the conference alignments are the old ones. The "Pac-10" you'll see later is not a misprint. They are four-year scores, so they cover more than just 2010-11. Also, the key number to be above is 930. Right now a sport's APR must be above 900 to avoid losing postseason privileges, but that bar will rise to 930 in the coming years. According to the NCAA's reckoning, 930 represents a 50% graduation rate.

Here are the six power conferences in order of average school APR. Notre Dame got a 970, if you're wondering. 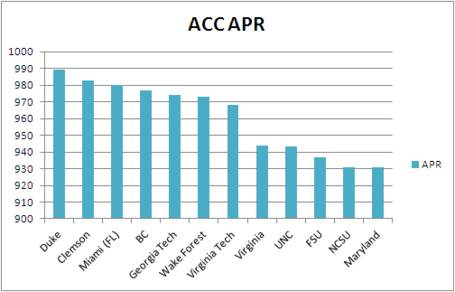 The ACC came in first with an average APR of 961. Duke was tops in the league with a 989, and it was the second-highest among the power leagues. Clemson also clocks in above 980 at 983, and only six BCS schools came in above that threshold. Maryland and NC State are barely above the danger zone at 931. 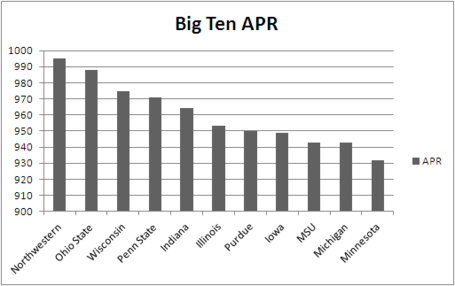 The Big Ten is second in line with an average APR of 960. Northwestern is the champ with a 995, the highest of all schools. Ohio State is a more-than-respectable second in the conference a 988, making the Big Ten one of two leagues with multiple teams above 980. Minnesota is just above the good line at 932. 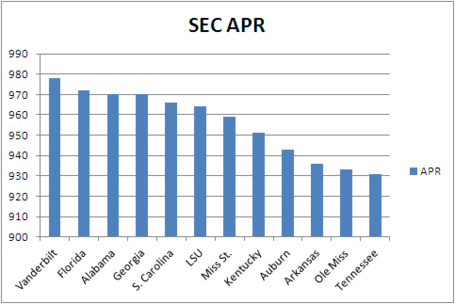 Well look who came in third. The SEC is next on the list with an average APR of 956. Vanderbilt is unsurprisingly the leader at 978, with Florida (972) and Alabama (970) and Georgia (970) not too far behind. Attrition-ravaged Tennessee brings up the rear with a 931, though Ole Miss at 933 isn't that far ahead. 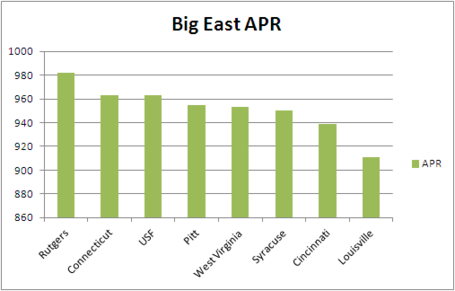 The Big East comes in fourth at 952. Rutgers is way out ahead with a sparkling 982 APR. The next highest are UConn and USF, who tied at 963. Louisville is one of two BCS programs below the 930 level at 911, a hole mostly dug by Steve Kragthorpe. Cincinnati is somewhere above at 939. 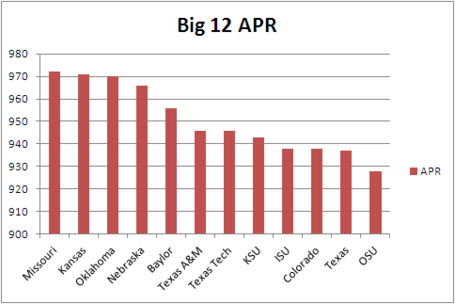 Hitting out of the five-spot is the mathematically correct Big 12 with an average of 951. Missouri is the leader here a 972, which is the lowest high score of any league. It's still first in its class, though. Kansas is just behind at 971 and Oklahoma is a hair behind that at 970. Oklahoma State is the other school below 930 at 928, and Texas is second-to-last for some reason at 937. 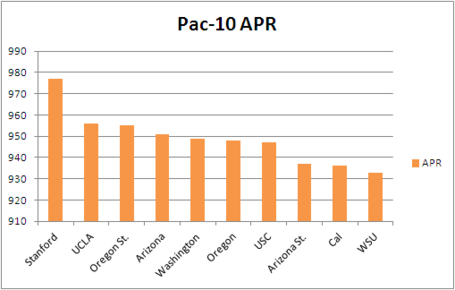 Coming in last is the "academic" ""powerhouse"" conference known as the Pac-10 (just teasing with the scare quotes, kinda) with an average of 949. Stanford is of course first at 977. After that though, the scores get relatively mediocre with UCLA's 956 and Oregon State's 955 in second and third. Washington State is hovering just above the APR Mendoza line with a 933.

So that's football. Each athletic program at each school gets its own APR score, so if you want to look them up, hit the NCAA's database.