Share All sharing options for: Looking at College Football Attendance

Last week, a link got passed around quite a bit for an online tool for looking at college football attendance over 2006-11. I've played around with it some, and here's what I found was interesting from it.

First of all, it's very clear that there is a pecking order when it comes to attendance: 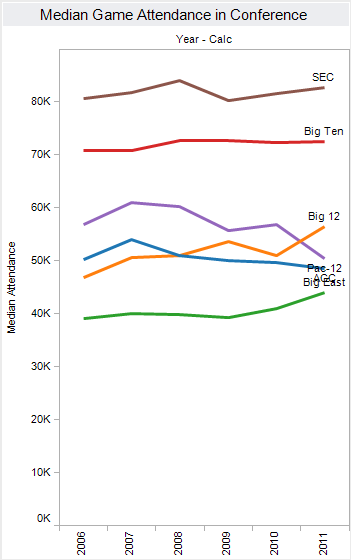 The SEC is far and away first, with the Big Ten a clear second. The Big 12 just hopped above the Pac-12 last year after a steady rise, and the ACC is hanging in their in fifth with the Big East last. Of course, this order could get moved around some as the new expansion moves of the last year come into effect.

One mystery I wanted to solve was why the Pac-12 median attendance fell so dramatically. My initial hunch was that the additions of Colorado and Utah had something to do with it, and sure enough, that's a small part (roughly 10% or so) of it. The median capacity of Pac-10 stadiums was 59,359, and the median capacity of Pac-12 stadiums is 58,792. For reference, only Vanderbilt and Mississippi State have smaller stadiums than either of those median capacity figures among current and future SEC schools.

The larger problem is that many of the high capacity Pac-12 schools had bad years for attendance, while the best-performing schools have small stadiums. And also, Cal fans quit on the team in a big way (sort of).

Stanford and Arizona State were big attendance gainers, but Cal single-handedly cancelled them out. That left the malaise among the top stadium capacity schools to drag down the median attendance for the whole league by quite a bit. The Pac-12 will have the ability to pass up the Big 12 again, as the revamped Big 12 from 2012 on will have a median capacity of only 900 above the Pac-12's, but it will take big years from the big capacity schools to get there.

Note: Commenter Nashville points out that Cal played in the San Francisco Giants' AT&T Park last year as the crumbling California Memorial Stadium got renovated. It only has a capacity of about 42,000. That said, Cal still didn't sell it out consistently, and it's only a 30 minute drive from campus.

In any event, the SEC really has only one truly small stadium with Vanderbilt Stadium. Mississippi State's Davis-Wade Stadium is the next smallest at 55,000 and change, but upcoming expansion will push it over 60,000. Every other conference has at least three stadiums under 60,000 in capacity, including a high of seven in the Pac-12.

The expansion at Davis-Wade is hardly an exception. Ole Miss will expand above 70,000, Arkansas is expanding by around 5,000, and Missouri is planning for a small expansion. South Carolina will put in a mammoth video board and Vanderbilt Stadium is being worked on (if not expanded). Kentucky AD Mitch Barnhart would like to spend $75-100 million on stadium improvements, but he just can't get the state to let him issue bonds for it.

All six of the SEC's smallest stadiums (those listed above) are being or will be worked on soon except UK's, which has leadership that wants to but can't politically. "Smallest" here is a relative term of course, with Williams-Brice in Columbia having a capacity above 80,000. The big ones aren't static either. Alabama went over 100,000 for the 2010 season, LSU is expanding Tiger Stadium to just under 100,000, and Texas A&M's Kyle Field (capacity of around 83,000 but can fit up to around 90,000) is due for improvements here soon with its SEC windfall.

The high attendance and nonstop facilities improvements are some of the big reasons why the SEC is the top football conference and will likely remain as such on into the future.