Georgia to Wear Pink Football Uniforms This Fall? Probably Not

Share All sharing options for: Georgia to Wear Pink Football Uniforms This Fall? Probably Not 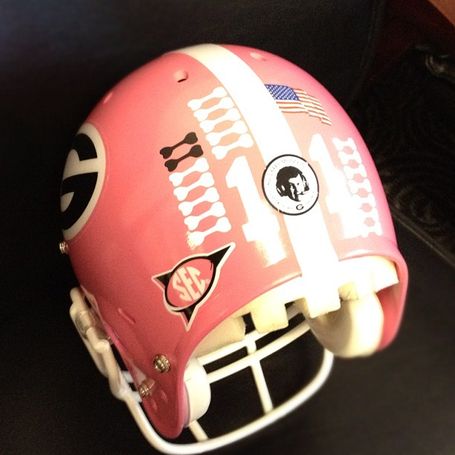 The NFL has had teams work pink into their uniforms to support breast cancer awareness for a few years, and it looks like that trend is coming to the SEC this fall.

Aaron Murray posted this image to his Instagram account with the caption, "Ready for our Pink out game next year". I've done a bit of searching and cannot find any other information or an announcement of such a game, but Murray had a Twitter conversation with an equipment manager Kevin Purvis (@ugaequip) about the helmet. Purvis said that the helmets for the team had arrived and he was just waiting on the jerseys and cleats from Nike.

You'll also notice a rather large sticker in the middle there. It appears to be the memorial sticker for Larry Munson, the legendary UGA sports broadcaster who passed away last fall.

Georgia has done similar events in the past. Its gymnastics team has an annual pink out meet, the most recent of which happened this past February.

Note: I added a question mark to the post title in case this is a joke by Murray. I have reasons to think it could possibly be legit, but it might not be.

The lesson here for all of us is (as always) to be very careful with what you post on Twitter and make sure that something that's a joke is clearly a joke. Given the Dawgs' history with changing uniform colors in recent years, this was not clearly a joke.