How Texas Beat Everyone in Revenue

Share All sharing options for: How Texas Beat Everyone in Revenue

Yesterday, I took a look at the USA Today's new report on the finances of college athletics. Texas, as usual, was the runaway top earner in the country.

Today, I'm breaking down the revenue side to show just how the Longhorns outpaced everyone else. The revenue categories are tickets, contributions, licensing, and other. The USAT has full descriptions here, but here's the gist. "Tickets" includes only the face value price of tickets sold and associated shipping and handling fees. "Contributions" includes all donations, including the (wink wink, nudge nudge) donations for the right to buy season tickets. "Licensing" includes TV and other media money, merchandise, sponsorship, and ads. "Other" includes anything else, from bowl game and NCAA tournament money to camps to parking and concessions.

In the following charts, I'll be looking at the top ten revenue earners without including subsidies (athletic fees and school contributions). 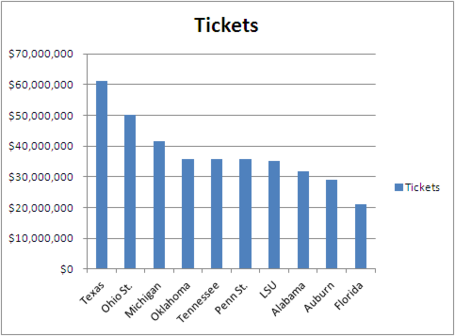 ESPN actually published the 2010-11 NCAA filings for seven of these ten schools, with LSU and Penn State the only ones left out and Tennessee's 2009-10 report published for some reason. I took the figures the schools reported and the NCAA's attendance statistics for the big three sports (football, men's basketball, and baseball) to figure out average cost per ticket. It's not perfect because there are a lot of free or reduced cost student tickets mixed in there, but it gives a rough estimate. One note: the figures for Texas here are going to be low for reasons I'll explain shortly.

For ticket revenue across the big three sports, Texas was second at $40,9 million behind Ohio State's $47.5 million. Prices in Austin for the big three sports were high, but they trailed No. 2 ticket revenue school Ohio State overall. It's not because of the non-revenue sports, which at less than $1 million combined in income for the Longhorns, are called "non-revenue sports" for a reason. So how does Texas end up $11.2 million ahead of the Buckeyes?

It's tucked away on the filing in a category called "Revenue Not Related to Specific Teams". In that field, Texas reports $19.4 million in revenue. The next highest is Ohio State at $1.6 million. Half of the eight schools reported zero income for that category.

The NCAA's instructions for the tickets section say to include revenue from ticket sales and "money received for the shipping and handling of tickets". It specifically says not to include tickets for conference and national tournaments on campus or "amounts in excess of a ticket's face value paid by ticket purchasers". It can't all be shipping and handling charges, can it?

My best guess is that some of that money is for the Longhorn All Sports Package. It gives students, faculty, and staff the ability to purchase a pass good for all sports where tickets cost money for $80 per year or just $40 for the spring sports. Pass holders can purchase additional tickets for a spouse or dependent for $93. Because it's good for all sports, I'm guessing that it's filed under Revenue Not Related to Specific Teams. If that's true, then the existence of the LASP is why those average ticket prices for Texas above aren't quite right. They should go up by some amount if the LASP is accounted for accurately and it is indeed counted under Revenue Not Related to Specific Teams.

The LASP can't account for everything though, because even if you assume that all LASPs are for the full year and half of them are the higher priced spouse/dependent passes, Texas would have to sell 224,349 of them to hit $19.4 million in income. That's obviously not happening. If you assume 40,000 LASPs are sold at full year value, which is probably far too high but gives a sense of scale, that's $3.2 million in revenue. That leaves a lot left over.

Unless the reporting was done incorrectly, the non-LASP element has to be shipping and handling fees of some sort (examples: fee of $15 on student orders, fee of $30 for students to get tickets from will call instead of printing a PDF at home). Even so, I still think there's something funny going on with the accounting across schools. Oklahoma claims zero for Revenue Not Related to Specific Teams, but I checked and there are fees on ticket purchases. Maybe Texas puts all fees into Revenue Not Related to Specific Teams while other schools put fees into the individual sports' buckets? I don't know and I'm not sure how to find out.

And if it's not an accounting difference or a reporting error, then Texas fans are getting soaked for a remarkable amount of shipping and handling fees.

One other thing that jumps out to me: the five SEC schools in the top ten in overall revenue are in the bottom six in ticket revenue. 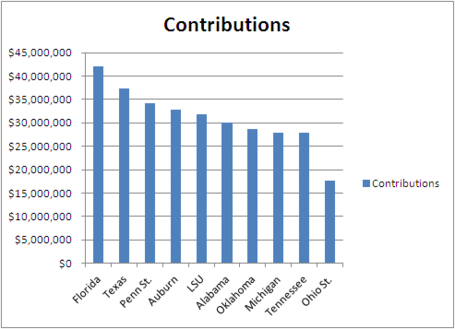 Texas plummets all the way to No. 2 in Contributions revenue, behind only Florida. UF was last in tickets but first here, which makes me guess that Florida makes up for lower ticket prices with high seat license fees. I do know for a fact that those fees at UF have been going up in recent years. Another clue is that on Florida's NCAA filing, it reports $37.1 million in football-specific contributions. That's about $7 million greater than the next-highest school (Texas, of course, at $30.2 million).

Ohio State's low total here is probably a result of the exact opposite strategy of what Florida does. OSU does sell seat licenses for its basketball arena, but the information pages for its football luxury suites and club seats seem to indicate that all costs are encapsulated in the ticket price rather than divided into separate ticket prices and required "donation" fees. Also, OSU reports only $15.1 million in football-specific contributions, which is the third-lowest amount of the eight schools that the figures are available for. 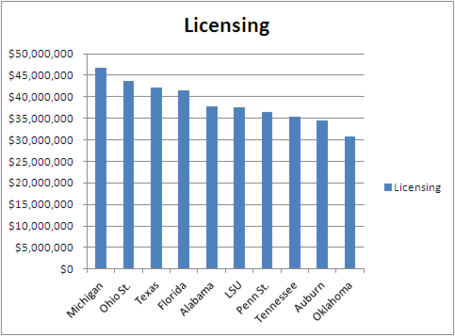 It should come as no surprise that the top two in licensing benefit from the Big Ten Network. I don't know why Penn State lags so far behind, as its itemized report isn't available (and OSU and UM lump most of this category into the Revenue Not Related to Specific Teams bucket anyway). Texas at this time was taking advantage of the Big 12's unequal revenue sharing model, which is probably one reason it ranks ahead of Oklahoma. Texas also is a much more populous state, it should be noted, and probably sells a lot more merchandise as a result.

Then again, TV revenue isn't as big a part of the pie as you might think. The SEC made $158.3 million from TV in 2010-11, which comes out to an average of $13.19 million per school. The conference's deal, like all TV deals, starts small and escalates as the years go on. The rest of the average $19.5 million payout from the league came from postseason revenue and the SEC Championship Game, and that money goes into the "Other" category. Or, at least, it's supposed to. 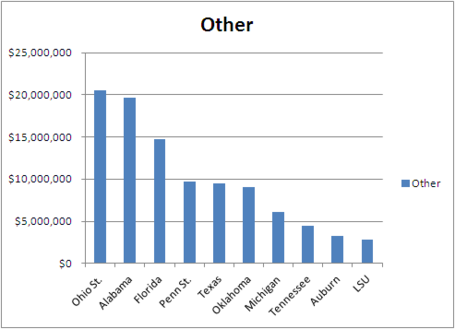 Here's a great example of how the accounting from school to school is different. All of the SEC schools listed here received approximately $19.5 million from the conference, with approximately $6.3 million of it coming from postseason play like bowls, March Madness, and SEC championship events. That postseason income is supposed to be in this category, but Tennessee, Auburn, and LSU all report well under $6.3 million for this part.

Texas actually is in the middle of the pack here, which is uncharacteristic of the school. Again though, it's as likely to be due to accounting differences than anything else. 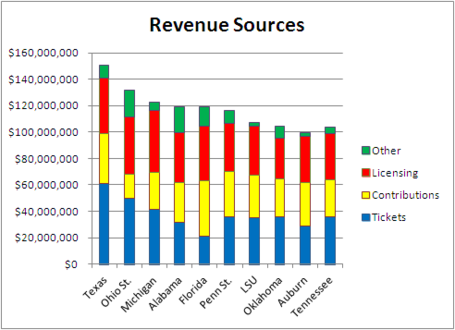 There's your overall revenue chart. Texas is way out ahead before you even get to the final "Other" category. It's primary advantage in revenue is that it both charges high ticket prices and is big in donations and contributions. All the rest of the schools are big in one but not the other. As long as Texas fans continue to be willing to shell that out, the Longhorns will remain on top.