SEC Baseball: How Did South Carolina Take the Lead in the East? The Schedule Didn't Hurt

Share All sharing options for: SEC Baseball: How Did South Carolina Take the Lead in the East? The Schedule Didn't Hurt

After the second weekend of the SEC season was over, South Carolina stood at 1-5 in the SEC and four games back in the division standings. Their hopes to win the SEC East were on life support and even hosting a regional seemed to be almost out of the question. Then, things changed.

Suddenly, the Gamecocks started tearing off wins and climbing their way back into the hunt for the East with Kentucky and Florida. Since that lackluster start, South Carolina has gone 15-3 and now leads the division by a game headed into this weekend. It's just the old Gamecock luck showing up at the right time. Except, not really.

Actually, a big part of South Carolina's resurgence has been a grueling schedule coming back down to earth at the same time that Kentucky and Florida's schedule has gotten a little harder. In fact, if you look at the cumulative SEC winning percentage of each team's opponents, the Gamecocks have now played a noticeably easier schedule than either of their rivals. 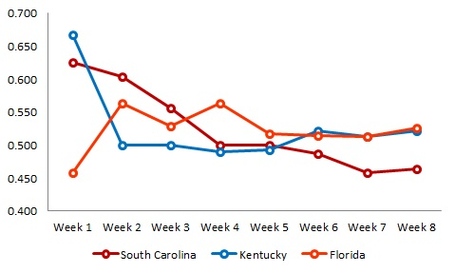 By this measure, South Carolina started out with easily the hardest schedule in the division, then began to gain ground as it's schedule got closer to its rivals. It's passed them now that it has played the easiest schedule so far of the three teams.

Certainly, anyone who's paid attention to the Gamecocks knows that they're now playing better baseball, so the easier schedule hasn't been the only thing that's at work here. The return of Matt Price to closer role has helped a beleaguered Gamecock bullpen find its footing, and the offense has come along. But it can't hurt that South Carolina hasn't played an SEC team that current holds a winning conference record since late March.

That said, South Carolina can't just coast to a win the SEC East. They play a Georgia team that sits at .500 even going into this weekend and finish up the season against LSU. In fact, the graph of where each team's final schedule would look like based on its current cumulative winning percentage looks something like this.

South Carolina's schedule strength ticks upward significantly over those last two weekends, while Florida and Kentucky's both drop. Right now, the teams that Florida has played or will play have won 123 games (this, of course, counts the games against Florida for the teams in the first eight weeks). The number for Kentucky is 119. South Carolina's overall league slate has won 117 games. When you project that over the 240 games that each team's opponents have played, the difference adds up to not a lot.

So even if South Carolina hasn't "earned" the SEC East lead until this point, they will have to over the next two weeks. And if each of the teams play as well as they have most of the season, the narrowing of the schedule gap guarantees a great finish to what has already been a topsy-turvy season in the division.