Share All sharing options for: Sprints Stops by Home Depot Before Discussing Structures // 03.01.12 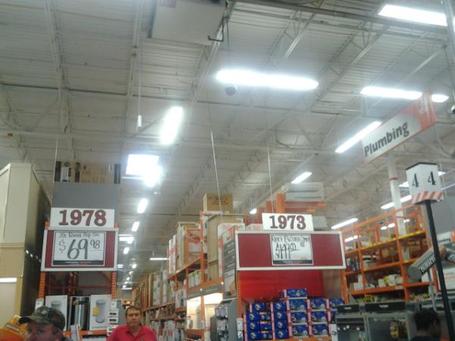 This photo has been passed around everywhere, but it still deserves a mention here. A Tuscaloosa Home Depot has redone its aisles to be numbered after Alabama's national titles. It's a thing of genius. (source, via)

Regular season structure: still up in the air.

The much analyzed meeting of SEC athletic directors came and went without any final decisions being made. That much was to be expected, as it's a long and arduous process to get 14 people with contrasting desires to all agree on something. However, we didn't get a single tidbit of information, which is disappointing. Can't you just throw one little leak our way, guys? They'll meet again in NOLA during the basketball tournament next week.

The nation's sports fan-in-chief, President Obama, sat down for an interview with Bill Simmons. Yeah, I know. Anyway, he expanded on his sentiment from four years ago when candidate Obama called for a playoff to replace the BCS. He wants to see an eight-team bracket, though he'll take a four-team bracket as "a good place to start".

I think you can make a great case for eight being the right number if you comb through the BCS standings archives, but I'd rather see four because it'll be easier to fight bracket creep at four than at eight.

FSU blog Tomahawk Nation took a look at the Football Outsiders F/+ rankings for conferences over the last five years, asking the question, "Who's Number Two?". You know, because the SEC being the best really goes without saying.

In fact, the SEC is first in everything looked at except the offense category, in which it's No. 2. The numbers back up what we've known all along.

Tune in, then don't touch that dial.

YouTube has introduced a new Channels feature, and SBNation is one of the featured partners. We've got a channel, so hit the link and subscribe. Spencer Hall of EDSBS and Jason Kirk of SBNation Atlanta have a college football show on it called "Shutdown Fullback" that promises to be fantastic.