How the SEC's Top Six Fared Against Each Other

Sorting out the top of the conference is hard, so let's focus on how they did against each other.

Share All sharing options for: How the SEC's Top Six Fared Against Each Other

The top of the SEC this year, relative to both the rest of the conference and nation, is perhaps stronger than it has ever been. Six teams inhabit the top ten, and none has lost to anyone except each other. They played a lot of close games, and it's difficult to say whether any are definitively better than the rest.

These teams don't have any big time common opponents outside the league, so that means the best way to compare them against the best is to look at what they did against each other. I chose six categories to look at: scoring, total yardage, yards per carry, passing efficiency, yards per pass attempt, and turnovers. I was concerned with looking at the teams' margins in these, meaning points for minus points allowed, yards for minus yards allowed, etc. to see where teams' advantages are.

By the way, here is how the records ended up: 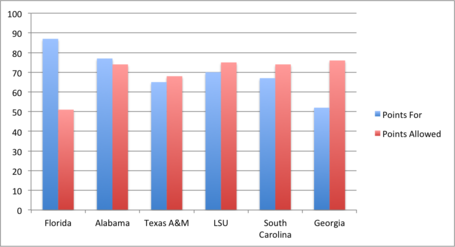 Two games really make the difference here: Florida 44, South Carolina 11, and South Carolina 35, Georgia 7. Otherwise the games played among the teams were close, all of them decided by single digits. It is an interesting quirk, though, that only two of the teams came away with positive scoring margins. Had Alabama lost in Atlanta, then only one team would have a positive scoring margin. 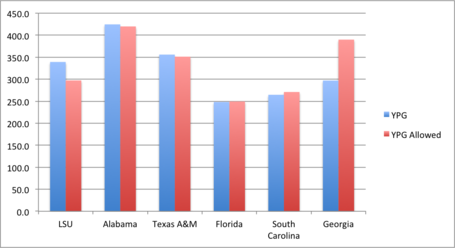 This category really caught my attention. Alabama and Texas A&M had exactly the same yardage margin, but it was the Crimson Tide that both gained and allowed more ground than the Aggies did. While it's true that Bama had to play the league's two best quarterbacks not on the Tide's own roster, as we'll see later, one of them didn't exactly play all that well against the top teams. Plus, let's not forget that Bama helped make Zach Mettenberger look pretty good for a game.

Another thing is that while LSU came out on top here, it wasn't because of consistency. The Tigers outgained South Carolina by almost 200 yards and outgained Alabama by about a hundred, but they lost the yardage battle to Texas A&M by roughly 100 and to Florida by 37. That fact is a microcosm of why it's so tough to sort out the pecking order: everyone had their good and bad games. 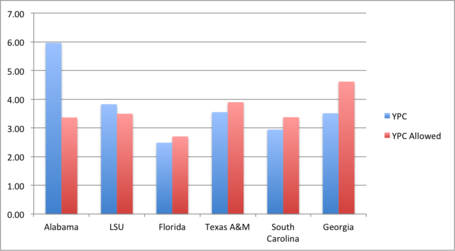 Here is the category where Alabama shines. The Tide is at a shade under six yards per carry, while no one else is even over four. I will introduce one caveat here, which is that I didn't take sacks out of this like I normally do. It would have taken too long, so they still are in here. I think that's why Florida's offense registers so poorly here, as Jeff Driskel never did learn to throw the ball away. Georgia's defensive performance here also looks a bit worse when you consider that its sack rate against good teams is actually pretty high. 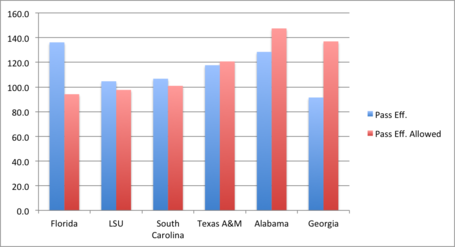 I do have a bit more skewing to report here. Boosting Florida's mark is Driskel's game against South Carolina when he had four touchdown passes despite going 12-for-17 with just 94 yards on the game. A slew of Gamecock turnovers helped that happen, although he did post a 163.9 against Texas A&M with no similarly strange circumstances. The same goes for Georgia's awful mark, as Connor Shaw's masterful 6-of-10 for 230 yards and two touchdowns yielded a 262.1 and overshadows a great performance against Florida (96.7) and a decent one against Bama (132.9).

What isn't subject to oddities is Alabama's group-worst score here. Mettenberger had a 147.7, Manziel had a 167.3, and Murray had a 129.1. Those were the best individual performances they each had in this selection of games by margins of 57.9 (Mettenberger), 35.7 (Manziel), and 37.9 (Murray). This is what I alluded to earlier. Murray had a terrible game against South Carolina and was almost as bad until the end against Florida, but he did pretty well against the Tide. 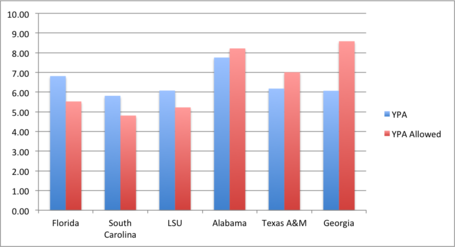 This chart reiterates the passing defense argument in a slightly different way. Florida still comes out on top, but it doesn't have to do with funky weirdness. South Carolina clocks in second despite having the lowest YPA rate because it had by far the lowest YPA allowed rate. Alabama and Georgia have that-can't-be-right figures for defense, but they are right. 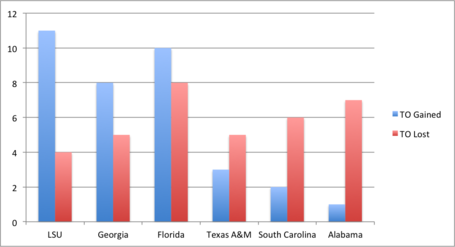 Finally we close with turnovers, the stat most commonly stated in a margin context. It's one where LSU shined and Alabama really, really did not. The Tide was -3 in its loss to Texas A&M, and that's going to make a huge difference in a five-point game. Georgia's margin of +3 in its win over Florida was huge as well. You'd think LSU would get more mileage than a 2-2 record out of its +7, but it was a whopping +5 against Texas A&M and was +2 in its narrow loss to Alabama where factors other than turnovers decided it.

I gave each team a point score for its rank in each of the categories: 1 for being first, 2 for second, and so on. Like golf, the lowest score is best. For this final comparison I left out YPA because I didn't want to double-count passing. Here's how it turned out:

The top team didn't make the conference championship game because it couldn't hold a late lead, and the second one didn't either because it picked the worst possible game to lose among its four. Sometimes, that's life.

The differences between these teams aren't as great as these numbers would suggest, because reality doesn't really conform well to a system of discrete ranks. That said, South Carolina and Georgia do seem to be well behind the rest. The Gamecocks were fifth in four of the five categories, while the Bulldogs were sixth in four of the five. Texas A&M seems to be a solid fourth, too. Among the top three, however, it's very close. The only reason why Alabama appears behind LSU and Florida is turnovers. Those three seem to be the cream, with the others a small bit behind.

Of course, this only looks at the very top games. Alabama has a blowout win over Michigan not included here, while South Carolina has a nice win over Clemson that isn't here. Florida has a good win over FSU, but it also had a last-second escape over Louisiana-Lafayette. Perhaps bowl season will help us shake things out, or perhaps all six will win their bowls. Either way, it was a strong season for the best of the SEC.