Share All sharing options for: Kentucky Coaching Change: The Tragedy of Joker Phillips

EDITOR'S NOTE: These are some thoughts I've had about the dismissal of Joker Phillips over the last few days. The need to focus on a national story that Florida played a critical role in -- you might have heard something about that -- made it difficult to sit down and actually write them until now.

It wasn't that long ago that Joker Phillips' move to the head coaching position in Kentucky seemed like the only head-coach-in-waiting arrangement that hadn't gone horribly awry. Will Muschamp, the original HCIW, ended up taking the head coaching position at Florida instead of waiting on Mack Brown to leave Texas. James Franklin, the head-coach-in-waiting at Maryland, joined him by taking the job at Vanderbilt instead of cooling his heels for a couple more years in College Park. And there was the programmatic equivalent of a couch fire in the bizarre Bill Stewart-Dana Holgorsen saga at West Virginia.

But before last season, the Rich Brooks-to-Joker Phillips handoff seemed to have gone relatively smoothly. The bowl streak remained intact, even if Phillips' inaugural season as head coach ended up with a puzzling loss to a Pittsburgh team that was a basket case at the time. And add to that the upset of a SEC Championship Game-bound South Carolina team that Kentucky hadn't defeated in a decade, and Phillips essentially seemed to be picking up where Phillips left off -- maybe even improving things a little bit.

Now, Phillips seems to be putting the program in about the same place where it was when Brooks took over. Phillips is 2-11 over his last 13 games, with the only bright spot being last year's surprise upset of Tennessee, and two straight blowout losses to Vanderbilt being the clear lowlights.

The thing that has to have made the fall all the more difficult for Kentucky was that Phillips was supposed to be the local guy done good. Phillips was a player at Kentucky from 1981-84, and he has spent all but six of his 25 seasons coaching at Kentucky. After hiring an outsider to build the program up, the Wildcats would turn it over to an alumnus to keep things going.

But there was always a question about Phillips that had to nag at you. While the skills needed to be a head coach and a coordinator aren't always the same, the fact is that Phillips was never really all that good as an offensive coordinator. He wasn't terrible, but a look at his offense from 2005 -- when he took over as coordinator at Kentucky -- to this season also shows results that are uneven, at best. 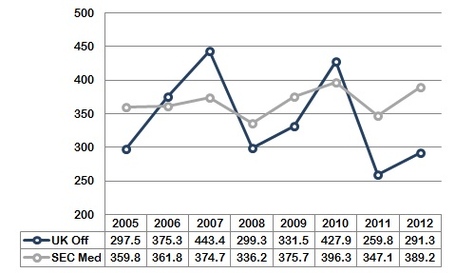 There are only two years when Kentucky was substantially ahead of the median SEC offense under Phillips, and one of those was 2007 -- known to most of us as "Andre Woodson's senior season." I'll leave it to your judgment as to how much credit Phillips gets for that.

Of course, all of that could have been overlooked if Phillips had continued to win. Which brings us to part of what makes Phillips' story so tragic -- the fact that he was a head-coach-in-waiting might very well have contributed to Phillips' downfall.

A season or two ago, I was talking to Glenn Logan of A Sea of Blue (I believe on our podcast at the time) when he made the point that Joker Phillips could actually end up with a shorter lease because of how he got the job. The thought process went something like this: Because Phillips was part of the Rich Brooks regime, he brought all of the existing baggage of the Rich Brooks regime with him.

So the sense that the program had hit something of a ceiling and had actually plateaued in the last couple of years with Brooks at the helm had carried over to Phillips, rather than Phillips being seen as a fresh start who should be given a few years to install his program.

At the same time, I think it's fair to say that Phillips doesn't enjoy the same stature among Kentucky fans that Brooks did. Brooks' shortcomings in taking the next step at Kentucky could always be overlooked, because he was the one that had rebuilt a decimated program into a perennial bowl team; Phillips had far less capital to draw on when the program seemed to stall out.

The other part of Phillips' dismissal that has a tragic tinge to it is that Phillips is generally seen as a good man, and looks very much like one who was as loyal to his alma mater to the end. It's a sense that was only reinforced earlier this week, as I read his remarks during what turned out to be his last press conference before being fired, after the 40-0 shutout against Vanderbilt.

But here’s the thing: If there was a decision either way, I would think it would be important for me or Mitch to come out and make a decision, either way – (it would) help either way. Help get another guy or help us in recruiting.

Glenn has portrayed that as Phillips essentially asking Mitch Barnhart, who's been around since before Phillips returned to Kentucky in 2003, to go ahead and fire Phillips now if he was going to do so eventually. And that's certainly one way to read it, and perhaps the right way to look at it.

The other thing you'll notice, looking through that transcript, is that Joker Phillips doesn't look to throw anyone else under the bus. The small crowds didn't matter, he said after a pathetic showing by the Kentucky fan base. His roster is relatively young, he notes, then adds that there are no excuses in the SEC. And when he talked to the press about his decision to stay around, he says he did so not because he wanted to -- quite the opposite -- but because the players wanted him to.