Who's on top, moving up and moving down in our weekly summation of the top teams in all of college football

Share All sharing options for: BlogPoll Ballot, Week 11: No New No. 1 Here

Because my ballot didn't have Alabama as No. 1 to begin with because of their resume, the hunt for a new No. 1 wasn't as difficult for me. (And, yes, I still think it's Kansas State.) But there were a few changes, including a rather large leap that you probably saw coming.

To that Kansas State and Oregon bit first. Here's a chart I've come up with that kind of describes my thinking about why the Wildcats should lead right now on a resume ballot, though I think the Ducks will ultimately be No. 1 if both teams win out. 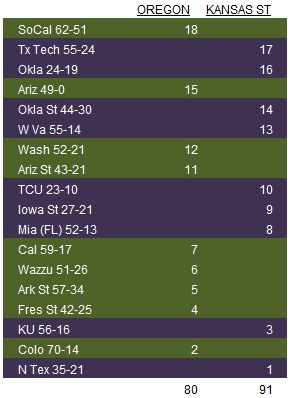 If anything, I tried to go with Oregon when I wasn't sure about which game would be higher rated. (Though good luck with anybody trying to make heads or tails of whether a 40-point defeat of Kansas or a 56-point clocking of the alleged football team in Boulder is worth more.) And I did consider margin of victory, since the Ducks' main claim to fame so far seems to be that they incinerate their opponents.

Nothing else strikes me as really remarkable, though as always I'm happy to field any questions/complaints/etc. The chart: