BlogPoll Ballot: You're Probably Going to Hate It

This looks a little bizarre even to your humble correspondent. But just hear me out before you destroy it.

Share All sharing options for: BlogPoll Ballot: You're Probably Going to Hate It

There are three SEC teams at the top of this week's ballot. That's the part you will probably foresee. The order of those three teams might be another thing.

Yeah, yeah, I know. I'm getting there. Let me explain my thinking before you devour me.

RIGHT NOW, Florida has the better resume than Alabama. The Gators have defeated LSU, clubbed Tennessee and edged Texas A&M. Two of those three teams are ranked in this week's ballot, one of them at No. 11 and the other at No. 19. Alabama has currently played no one who is ranked on the ballot. You will note that all three of the teams I talked about Florida playing will also play Alabama before the season is done. If Alabama defeats those teams by a better margin than Florida, the Tide will move back ahead of Florida. For now, the margin of victory over Michigan and some unimpressive portions of the other games on South Carolina's slate keeps the Tide ahead of the Gamecocks. Now, have at me in the comments if you want to.

I was thisclose to keeping Oregon ahead of South Carolina, and might be able to be talked into it, but I think Georgia is significantly better than Washington and the Arizona win for Oregon and the Missouri win for South Carolina are essentially a wash, so slight edge to the Gamecocks. West Virginia moves up because POINTS and also because they've now defeated two decent teams in as many weeks. Ohio State is pretty good and Stanford bounced back, but a lot of those two teams' upward movement is caused by other teams falling past them.

Nothing else needs too much explanation, I would think. Lousiana Tech and Ohio are largely experiencing schedule drag, though the Bulldogs will shoot up the ballot if they beat Texas A&M. I don't like a team moving up after getting 41 points dropped on them by Oklahoma, but I don't see a lot of alternatives. Besides, they've got the Iowa State win, and I think that's worth something. 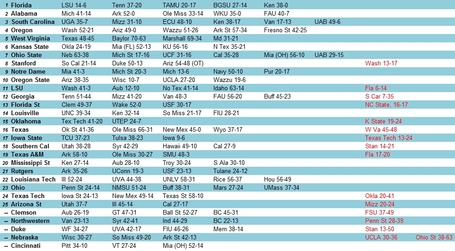