BCS Standings: When It Comes to Kansas State and Oregon, the Computers Have It Right

For the time being, the Wildcats have the better resume than the Ducks. And, if both teams win out, it might be pretty close at the end of the season

Share All sharing options for: BCS Standings: When It Comes to Kansas State and Oregon, the Computers Have It Right

The big news coming out of this week's BCS standings -- at least if the talking heads are to be believed -- is that Oregon fell again, this time behind Kansas State. This is largely because the much-hated computers are higher on Kansas State than they are on Oregon. Much higher. Kansas State gets two first-place votes from the chips and ranks second overall. Oregon is sixth overall and has just one computer ranking it higher than that. (Our old friend Richard Billingsley, whose machine puts the Ducks in second place.)

I agree with the computers.

Even if you take into account margin of victory, which Oregon wins are really of clearly better quality than the corresponding win for Kansas State? Beating Washington by 31 against Iowa State by six? Maybe. Then what? Does anyone really want to say Arkansas State is that much better than Kansas? I'll give you beating Washington State by 25 instead of North Texas by 14, but those are all a slim case for keeping the Ducks ahead of the Wildcats right now.

The question I really have is about the future. Let's take a look at the totality of both teams schedules for a minute: 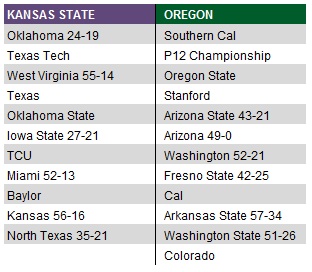 Here it gets a little tougher. I'm willing to call Oklahoma and Southern Cal a draw (since we don't know the margin yet) and give Oregon a second shot at Southern Cal (mostly likely) over Texas Tech. West Virginia and Oregon State are a close call -- the Beavers look very impressive right now, but they're only halfway through their schedule. So are Texas and Stanford. Arizona State is probably a better team that Oklahoma State, and the margin alone might give the Arizona game more cachet than the Iowa State game, though I think the Cyclones are the better team. Blowing out Miami is (probably) worth more than solidly defeating Fresno State.

All of that is to say that while you might be able to make the case that Oregon has the stronger schedule overall, it's not a slam dunk. (And it particularly wouldn't be a slam dunk if Kansas State had a championship game to play, but don't worry yourself about that; the Big 12 coaches are certain that a championship game makes it harder to win the BCS. That's much easier than blaming themselves for their inability to win a championship game when a berth to the national title game is on the line, you see.)

But that's different than what you hear from a lot of Oregon backers right now: Namely, that the Ducks have done everything that can reasonably be expected of them to this point and so should stay No. 2 until they lose. They might not go quite that far when they're saying it, but that's the logical extension of the "all they could be expected to do" argument.

That argument is flawed on a couple of levels. The first is that Kansas State has also done everything it could possibly be expected to do. Second, it assumes that because Oregon was ranked higher than Kansas State at the beginning of the season, it should remain there or at least be there at the end of the year if both teams win out.

And that's nonsense. It assumes that there is some intrinsic value to Oregon's preseason ranking, and there's not. If any team that had started below Kansas State had Oregon's resume right now, there would be absolutely no outcry over Kansas State being ranked ahead of that team. Teams do not earn their preseason ranking and are not entitled to it as long as they keep winning. And no team, no matter what it has done to earn an early season ranking, is entitled to squat on that ranking until the end of the season, just because it wins, regardless of against whom it wins.

You might say that Oregon can't control the vast majority of its schedule. But neither can Kansas State.

This argument is one of the reasons why I don't have a huge problem going to a four-team playoff. And it's also worth keeping in mind that these problems have historically worked themselves out in the end. But the people complaining about Oregon's lot in the BCS right now are a bit like candidates who whine because the polls show them behind. Fair or not, complaining about the numbers doesn't mean the numbers are wrong.

BCS Standings: Will Alabama Face Kansas State, and What Does That Mean?