This is a deep dive into LSU's passing game to determine what's going on and why it hasn't lived up to expectations.

I have watched every throw that Zach Mettenberger has had this season. Thanks to the efficiency of the SEC's video box scores, I've watched many of them twice. I still don't think I can completely explain LSU's passing offense, but I'll give it my best shot.

Everyone seems to agree that the Tigers' passing game is not up to snuff. The announcers throughout the Towson game kept saying how Les Miles wanted to use the game as more or less passing practice, and they agreed at the end that it was not a fruitful practice. The praise just rings in from And The Valley Shook about that game as well:

Let's dig deep into this issue to see what we can find.

Nothing in here quite suggests a passing game that is entirely broken. Mettenberger's only real down game was against Auburn, and he was over 10 yards per attempt against Washington and Idaho. His passing efficiency is not bad; a 150.5 on the season would have led the entire SEC last year. Offense is up in 2012 over '11 so it's not a completely apt comparison, but the point stands: it's not a bad score. Neither is his 65% completion percentage, nor his having thrown just two picks on the season.

That said, receivers have dropped 12 passes on the year by my count. If you give Mettenberger those completions at a rate of 10 yards each, as 10 is his median completion distance, he's throwing for 227.2 yards per game on 9.54 yards per attempt. He'd be up to 9th nationally in the latter department. His completion percentage would also rise to 75.6% and he'd have at least one more touchdown if memory serves. With these drop-adjusted stats and an extra TD pass on the year, his passing efficiency would rocket up to 171.9.

I kept track of the outcome of each of Mettenberger's passes. Here, I'm actually not concerned with yardage. I just want to know if the outcome was good (i.e. a completion) or bad, and if bad, what the cause was.

The "Throw Away" category includes a couple instances of intentional grounding.

The frustrations with Mettenberger's play against Towson come a bit clearer here. He set a season high for bad throws, he took three sacks (including getting blindsided on a the slowest corner blitz ever), and he even once tripped over his own two feet while dropping back. He also had a couple of balls disrupted by Towson defensive backs, something that had previously only been a problem against Auburn.

With that said, this still doesn't look like the residue of a hopeless passing game. Only about one in every 15 of Mettenberger's throws are bad, he's taken under two sacks a game (which aren't all his fault anyway), and defenders have only gotten their hands on eight of his 119 attempts.

A Question of Usage

It's a clichéd term, but LSU really does seem to like to use the passing game as an extension of the running game a fair bit. It's not that Mettenberger necessarily throws to the running backs more often than most teams, but rather than he is asked to throw a lot of swing passes, screens, and quick slants. They're high percentage passes that don't travel through the air much, tend not to get broken up or picked off, and don't generally gain that many yards. It just feels weird to say that because "using the pass as an extension of the run" is usually a description of pass happy Air Raid-type outfits, not a ball control offense like LSU's. These Tigers really like to run, and sometimes when they pass, they're still kind of running the ball.

To wit, here is the distribution of Mettenberger's completions broken up in five-yard chunks: 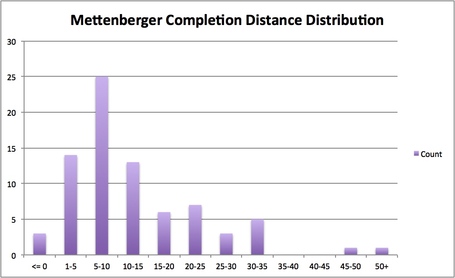 Here you can see that a lot of Mettenberger's completions haven't gone for that many yards. I mentioned earlier that his median completion has gone for 10 yards; his average completion has gone for 13 yards. Some longer completions skew the nature of his play so far. In fact, more than half (53.8%) of his completions have gone for 10 yards or less. Even that much doesn't tell the whole story about his underneath throwing, as, for example, Spencer Ware took a dump off pass for 33 yards against Auburn. Some of the longer distances catalogued here were catch-and-run situations where a receiver took a short pass and made a lot of it.

For comparison, here is the distribution for Aaron Murray's completions so far this year. He is the SEC's leading passer by several measures. Being in a Mike Bobo offense, he throws his fair share of screens and short stuff, but he's been more aggressive with his downfield passing. 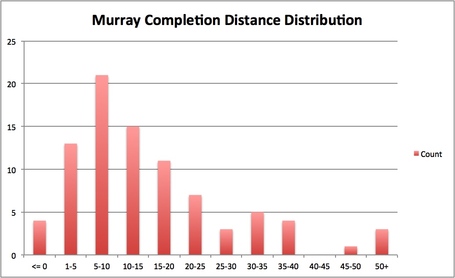 I wish I had tracked the distance of all of Mettenberger's throws, but unfortunately I didn't. I can, however, give you a very truthy graphic of where his throws tend to go. This refers to how far the ball travels in the air relative to the line of scrimmage. 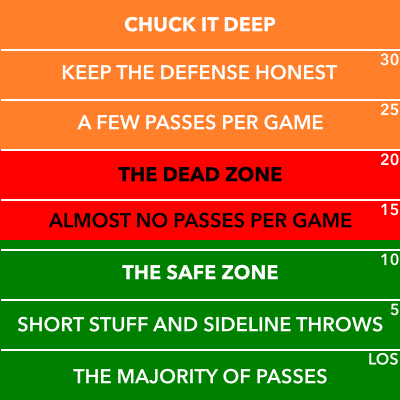 The lion's share of Mettenberger's throws are no more than about 11 yards up the field. It's about split evenly between swing and screen passes and 5-10 yard sideline passes. He didn't throw too many over the middle short. A noticeable but smaller amount of passes go deep. Mettenberger has a strong arm, Odell Beckham is a great deep threat, and any offense has to take some chances down the field to open up things shorter.

Very few passes have come in the intermediate range. Most of those have just been longer versions of the sideline routes that Mettenberger hits at shorter ranges. You can probably count on one hand the number of passes LSU has completed with the ball 12-20 yards down the field between the hashmarks.

Like I said, I don't have the numbers to back this up, but this is what it feels like when watching LSU play. The frustration of the fans, manifested by periodic boos during the Towson game, probably comes from the fact that the passing game is repetitious and largely made up of either dink-and-dunk passes or 50/50 long heaves. The stats look fine after the game, as I discussed above, but it feels like a mess throughout.

Wrapping It All Up

So where does this all leave us with the LSU passing game? Who is responsible for the state that its in?

Mettenberger does get some of the blame. He's still getting settled in his new environment, so he's had some miscommunications with receivers from time to time. His accuracy tends to come and go at times as well, although that can be said about most quarterbacks.

The receiving corps does get some of it too. They seem to be better athletes than football players. In fact Towson's Jordan Dangerfield, who had a good game against the Tigers, according to the ESPN announcers said that LSU's receivers are better after the catch than before the catch. That means they are dangerous in the open field, but they don't always run the best routes. As best as my eyes could tell, they don't run a wide variety of routes either.

That last point is all on the coaching staff. I noted before the season that the real opportunity that Mettenberger presented for LSU is not just that he might be better than Jordan Jefferson and Jarrett Lee were, but that he'd enable the coaches to run a more complex passing scheme to challenge defenses. They had to keep a small playbook for those guys last year, but this year they could open it up some.

"Open it up some" has basically meant that Mettenberger throws a few more deep bombs than the other guys did last year. I have seen no evidence yet that Miles, Studrawa, and Steve Kragthorpe intend to use a more sophisticated passing game. Perhaps it's due to the receivers being limited in their skills, or maybe it's just an aversion to risk. This is, after all, a team built around running and defense.

At this phase in the Les Miles era, the LSU passing game largely is what it is. Unless the coaches have been saving something up for five weeks specifically to unleash it in October, the Tiger pass attack is going to be a lot of short stuff with a few long throws mixed in. With the defense and running game that the team possesses, that might be enough to accomplish the goals of this year. It is, however, a disappointment for anyone who wanted to see more from this edition of the Tigers.

LSU Vs. Florida: Previewing the Battle Between the Tigers and the Gators