Auburn Midseason Report: What Have You Done for Us Lately?

Firing Gene Chizik might not be the slam-dunk decision everyone thinks it is. But there's still a strong case.

Share All sharing options for: Auburn Midseason Report: What Have You Done for Us Lately?

If you wanted a sign of just how far Auburn has fallen this season, here it is: They are getting seven points at Vanderbilt this weekend. The way Vegas treats homefield advantage means that a mix of oddsmakers and the gambling public likely believe that the Commodores would be favored by three or four points at a neutral field. When was the last time anyone said that about Auburn?

It's not without merit. The Tigers are 1-5 -- which means they're two losses away from not making a bowl game, and there are still matchups with Texas A&M, Georgia and Alabama on the schedule. Even if Auburn plays its strongest football in each of those games, winning two out of three is a mammoth undertaking. Which is one of the reasons why you're already hearing some buzz about whether Gene Chizik ought to be dismissed. 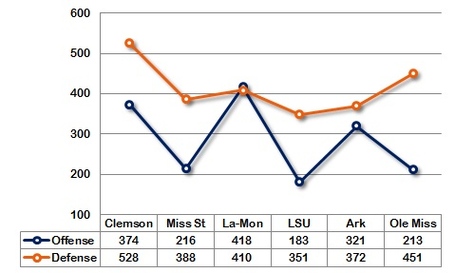 It's a trickier question than you might think. It's easy to say that Gus Malzahn and Cam Newton won the 2010 national championship, and there are very good reasons to say it. On the other hand, Gene Chizik hired Gus Malzahn and recruited Cam Newton. It wasn't like those two guys showed up on the Auburn campus and the head coach was then hired; so Chizik's role in that season can't be completely discounted.

And even if you want to give him only partial credit for the effort, keep in mind that you would be firing a head coach two seasons removed from a national title. With no confirmed major allegations from the NCAA on his record -- the Cam Newton matter doesn't count because the NCAA closed its investigation without finding any wrongdoing -- it would be almost unprecedented to let a crystal football toting coach go two years later.

The counter-case, of course, also has some punch. Gene Chizik is 22-34 all-time as a head coach without Cam Newton. He's 17-15 at Auburn, with the losses number likely headed up faster than the the win total. He is 7-13 in the SEC. And as much respect as you might have for Chizik's ability to recruit Malzahn and Newton, the likelihood of getting a Cam Newton every few years is almost nonexistent. He's a once-a-generation player, and Chizik has shown a curious inability to win many games without that kind of a talent on his sideline.

There's also the little matter of Chizik being a defensive genius with a knack for turning out teams that don't play defense very well. Brian VanGorder's defense has allowed more than 400 yards in half of its games, including an overtime outing against Louisiana-Monroe that almost capsized the entire season.

Gene Chizik will always be remembered for what he accomplished with Cam Newton at Auburn. The question looming over the remainder of Auburn's season is whether he has the chance to make sure he's remembered for more than that.