Share All sharing options for: Georgia Midseason Report: The Second Season Begins, But What's the Goal?

The way Georgia's season lines up after the halfpoint of the season is a little bit bizarre. The Dawgs are coming off their first loss -- something schedule makers could have thought possible but couldn't know for a fact. And they are going into a second season of sorts that forces them to face a question: What are they playing for?

Not in the negative sense, not in the sense of "what in the world are they playing for / why not just quit?" Instead, the question is the goal for Georgia. The Dawgs are not out of the race for the SEC East, but they have to hope that Florida can defeat a team that blew out Georgia by 28 points -- but that the Gators are incapable of defeating Georgia. That's not impossible, of course, but it's also not the likeliest road to a conference championship game. 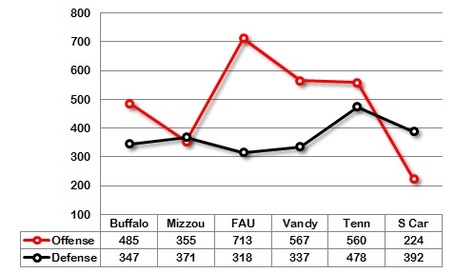 But to aim for anything less than an SEC East title would essentially be to mail it in for Georgia. A 10-2 season is all but in the bag; aside from Florida, the Dawgs' remaining opponents are at Kentucky, Ole Miss, at Auburn, Georgia State and Georgia Tech. Losing any one of those games would rank as a stunning upset, and a loss in more than one would likely bring out the pitchfork gangs who were calling for Mark Richt's head a couple of years ago.

Besides, if Georgia does "just" get to a 10-win season, the team will be in for the same criticism that faced the 2011 version: They beat the bad teams on the schedule and couldn't defeat the good opponents. The Dawgs might have a decent chance at having five wins against teams that are .500 or above, but i'ts going to be a close race until the end. The final numbers could just as easily be lower.

Which makes the World's Largest Outdoor Cocktail Party all the more intriguing. If Georgia can get a win there, then the second season could be very special indeed. Then, those easily winnable games become a real reason to think that the Dawgs could get to the SEC Championship Game with just one loss and a chance to get to the national title game.