Vanderbilt Midseason Report: The Second Half is Easier. Is It Easy Enough?

The Commodores need at least four wins to get into a bowl game. They might have a shot

Share All sharing options for: Vanderbilt Midseason Report: The Second Half is Easier. Is It Easy Enough?

For one of the teams that has to sort of MacGyver its way to a bowl game to begin with, Vanderbilt started off 2012 with one of the more horrendously front-loaded schedules. Florida, Georgia and South Carolina are the top three contenders for the SEC East this season -- and all three have already played the Commodores. Vanderbilt also played Northwestern, one of the best teams in the B1G (not that that's saying a whole lot this year); it's only "break," per se, has been Presbyterian College.

So as Vanderbilt sits at 2-4 at the midpoint of the season, needing at least four more wins to get to .500 and secure a bowl berth, the question is not whether the schedule will get any easier. There's almost no possible way it could get any more difficult. The question is whether it will go so much easier that the Dores can reverse their first-half record. 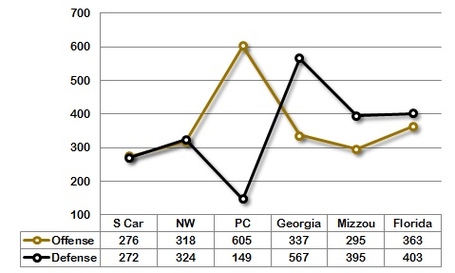 The game against against UMass is a certain win. The game at Kentucky is also a likely win. And the Auburn game this weekend is tilting more and more in the Commodores' direction, though the team could also rally if Gene Chizik were to find some magical inspirational abilities. The game at Wake Forest is perhaps the most unpredictable; this is a team that defeated UNC the week before getting clocked 52-0 by Florida State and roughly a month before Maryland.

If Vanderbilt should lose one of those games -- and it's not at all unreasonable to think that they might -- they will need to at least split the games at Ole Miss and against Tennessee. Generally, you would have to think that the Rebels would be the easier opponent this season, but that game is in Oxford and Ole Miss is no slouch on offense. Tennessee could also turn that game into a shootout, and I'm not sold that Vanderbilt has the offense to even stay competitive in a shootout.

Still, it's hard to see the odds of splitting Ole Miss and Tennessee as being too far away from 50-50. Which means that Vanderbilt has a very small margin of error to get to a second consecutive bowl game for the first time in school history. When you've been through the kind of first half that Vanderbilt faced, that's not a bad place to be in.