Arkansas Midseason Report: What More Can You Say?

The Hogs finally won an SEC game last week. Does it matter?

Share All sharing options for: Arkansas Midseason Report: What More Can You Say?

If there is anything that Arkansas' football season has not suffered from, a lack of publicity would be it. The downfall of Bobby Petrino and the zaniness of John L. Smith ensured long before the season even began that whatever happened in Fayetteville would be entertaining. When it involved a catastrophic loss in Week 2 and a continuing implosion ever since then, the possibility that anyone would stop paying attention to the Razorbacks easily became remote.

But something happened. Just as we all started to ignore Arkansas as an irrelevant footnote to the SEC this season, just as it was starting to become harder for us to force ourselves to pay attention -- they won a game. Granted, it was against Auburn, the one team in the SEC that was having almost as dreadful a season as the Hogs. (The only difference was that the Tigers won their overtime game against Louisana-Monroe.) But could it mark a revival? 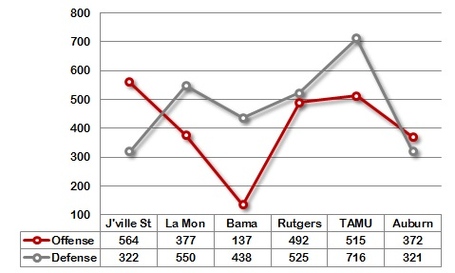 It depends. The Auburn game gives just enough hope that you can see the Razorbacks winning their next three games. They're not certainties, and the Hogs aren't likely to be favorites in all three (Kentucky, Ole Miss and Tulsa), but they are within the "winnable" category. And if Arkansas manages to tear off those three wins, they could improbably be 4-4 when they head to South Carolina with the most outside of outside chances at a bowl game.

There are at least two obstacles that you have to think could weigh on those chances, though -- the first one that's backed up by what's happened on the field, and the second one of the dreaded intangibles.

The on-the-field argument comes down to Arkansas' defense. It is epically bad. The Hogs are allowing 478.7 yards a game on average. They gave up a jaw-dropping 716 yards of total offense to Texas A&M University. Take the relatively combustible Ole Miss and Tulsa offenses and throw them into that mix, and Arkansas could find itself in a lot of shootouts over the next month. And shootouts have not been the Hogs' friends this year.

But the more intangible question is this: The national championship hopes are dead. Any path to an SEC title is almost completely implausible. And even a bowl shot is the equivalent of an inside royal flush draw. John L. Smith is not going to be back next year and the coaching staff is likely to be dismantled. So what exactly are the players playing for? And at what point do they start mailing it in?

If the focus slips over the next four weeks, any of the next three teams is capable of beating them. Okay, that's not fair -- Kentucky might not be capable of beating even Arkansas regardless of the Razorbacks' focus level. But Ole Miss and Tulsa aren't pushovers. They're not great teams, but neither is Arkansas.

This is John L. Smith's Alamo. If he can get the players to pull together for one final stand, he might be able to write a more favorable ending to his head coaching career. But given everything we've seen so far, you have to wonder if he has it in him.

Bret Bielema Hired to Take Over at Arkansas After John L. Smith Fired