There's a slight chance that South Carolina could make it to the biggest game of them all. But they need everything to go right

It hadn't always been pretty, but South Carolina was 4-0 at the end of September and had defeated Georgia on the road, slayed the historical ghost of Navy and proven that Vanderbilt would not derail the 2011 season. From all appearances, it was a clear shot to an undefeated record going into November -- and South Carolina lost.

That was around a year, of course, since South Carolina had beaten No. 1 Alabama to become a leading contender for the SEC East -- and lost to Kentucky on the road the following week. So as South Carolina heads to Baton Rouge to take on a questionable LSU team after administering one of the most lopsided Gamecock wins in the century-long series against Georgia, the fair question is: How far can they go?

A close loss against LSU would not be catastrophic. The interdivision game would not change the must-win nature of the Florida and Tennessee games. The Arkansas game is also going to be significant. And if we're really talking about the Gamecocks being in the national conversation, and we are, then a single loss might not hurt if South Carolina can go through the rest of the schedule and then defeat the SEC West champion in Atlanta. 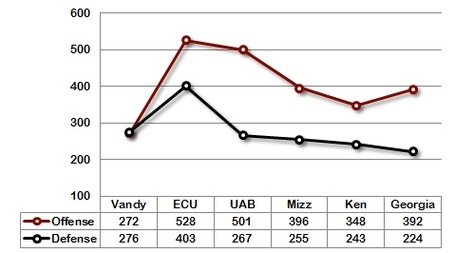 So if the question is, is it possible to imagine a scenario where South Carolina might make it to the title game, the answer is yes. But there are plenty of reasons to wonder whether it can actually happen. The Gamecocks can start to knock those down by winning in Death Valley.