Can the Tigers make it to the postseason in their inaugural SEC season? It depends on how well they navigate the differences between the leagues.

Share All sharing options for: Missouri Midseason Report: Looking for Another Turnaround

There was one thing that was supposed to be certain about the Big 12 programs that were transitioning to the SEC: Texas A&M might have better long-term prospects because of its tradition and recruiting base, but Missouri would be better in the short-term because of its talent and division. After all, the Aggies were going to get knocked around by Alabama and LSU, while Missouri had to play Alabama but would be contending in a division with South Carolina and Georgia.

It hasn't quite turned out that way. So far, the Aggies are 4-1 overall, 2-1 in the SEC and ranked. Missouri is 0-3 in the conference, including a loss to Vanderbilt, and finds itself aiming for perhaps the Music City Bowl after opening the year 3-3 with more difficult games waiting on the other half of the schedule. 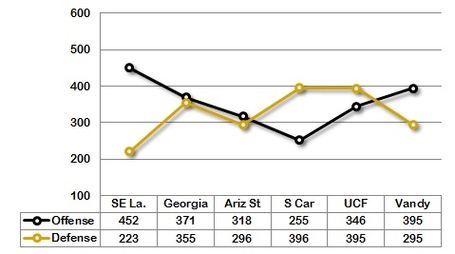 In fact, Alabama is the game before next week's bye. Then comes the last truly easy SEC game on the schedule -- Kentucky comes to Columbia -- before trips to Gainesville, Knoxville and College Station surround a home game against Syracuse. The Orange could be the only opponents listed as underdogs during that stretch.

What happened? Well, to an extent, this could be seen as a rerun of the beginning of last season for Missouri. After all, the Tigers started 2011 with a 3-3 record that also included losses to teams that ended up being in the conference race -- Kansas State and Oklahoma -- and a surprising loss (in retrospect) to Arizona State. They would end up a respective 8-5 with a win against Texas among the victories.

But there are also differences that could prove significant. In 2011, Missouri was churning out 496.2 yards of total offense a game; that number is 356.2 in 2012. A slight improvement in total defense -- from 337.8 ypg to 326.7 -- isn't nearly enough to make up for that. (Plus, while perhaps not for the same reasons that non-SEC fans believe, the SEC is a less explosive league on offense.)

The other difference is in the schedule. The sixth game, in which Missouri won and seemed to get on the right track, was against Iowa State. Suspect Texas Tech and Kansas were still on the schedule, and that helps. Gary Pinkel said as much in a slightly different way earlier this year.

They’re great teams and we came from a good league…the big thing that I see in this league is, and I knew this going into it, is there are a lot more good teams. That’s the difference. Not being disrespectful to anybody, but to me, it’s fact.

Missouri's been here before, but never in this league. The story of the season from here is whether they can turn things around against more good teams than they faced in second half of last year.