LSU Midseason Report: Better Lucky Than Good, Until the Regression Kicks In

Last year, LSU was a turnover machine that protected the ball. This year is a little more complicated

Share All sharing options for: LSU Midseason Report: Better Lucky Than Good, Until the Regression Kicks In

On the surface, LSU should remain one of the more confounding teams in the SEC this year. The Tigers returned much of last season's team, which buzz-sawed through the regular season en route to the BCS Championship Game. (Once they got there was, of course, a different story.) And at no time was that clearer than at the beginning of the season, when no team finished within two scores of the Bayou Bengals.

That's not the case this season. Sure, the first three teams on the scheduled posed no challenge, but Auburn lost by just two points against LSU and Towson kept it close before falling by 16. Then, of course, there was the loss to Florida. So this is not at all like last year's team. But why? 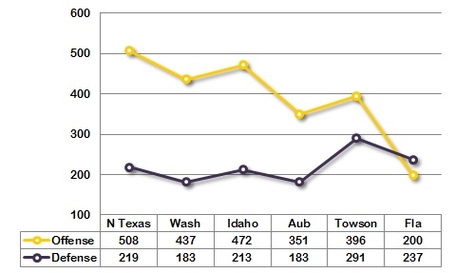 One of the easiest answers might be: It's the turnovers, stupid. Consider that, at this point in the 2011 season, LSU was averaging a +1.8 turnover margin per game. That's almost two extra turns with the football each contest. This year, LSU is averaging +0.5. Now, that's still a good number -- but it's a dramatic drop-off from a year ago. In fact, it's a 72 percent reduction in the Bengals' turnover edge.

Against most of LSU's opponents, this didn't matter. North Texas, Idaho, Towson, even Washington and Auburn were unlikely to be able to take advantage of the Tigers' newfound inability to win the turnover battle. But when it comes to an opponent like Florida, who was at home and a much better team than the one that got shellacked by 30 points in Baton Rouge a year ago -- well, then, it matters.

LSU actually lost the turnover battle to Florida -- 3-2 -- and that was one of the key differences in the game. After all, the Gators only outgained LSU by 37 yards. But a three-play, 59-yard drive in the third quarter with LSU down 7-6 ended with a fumble -- which led to Florida's final touchdown and essentially sealed the game.

The culprit has been the offense. Last season, LSU turned the ball over just three times in the first six games. That number in 2012 is 11. The defense, meanwhile, has largely done its job. Last year, the defense forced LSU's opponents to turnover the ball 14 times during the first six games; this year, that number is also 14. Do the math.

The upside is huge. One loss does not end the season, and a revival that begins with a win against South Carolina this week would still give the Tigers a chance to run through the SEC and head to Miami at the end of the year. But they'll have to hold onto the football to get there.