Joker Phillips' story is inspirational, but there's a reason some fans want to let him go. And it's not an altogether bad one.

Share All sharing options for: Kentucky Midseason Report: The Case Against Joker Phillips

There was a moment during the South Carolina game at Kentucky when I was listening to Mike Patrick -- I know, my first mistake -- and he began carrying on about how the Wildcats should give Joker Phillips more time. He stressed how Phillips was still relatively new as Kentucky's head coach -- he must have missed the several years Phillips was offensive coordinator and head-coach-in-waiting -- and how it took a coach a few years to get his system installed and show what he could do.

But the case against Joker Phillips is, quite simply, that Joker Phillips has already had two and a half seasons to show some sign of hope in Lexington, any sign at all, while taking over for a coach that showed that Kentucky can at least be turned into a perennial bowl team. The results are not encouraging. 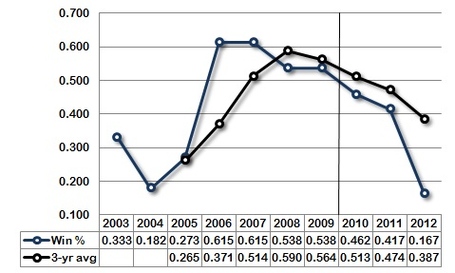 Obviously, we don't have a complete read on the 2012 season yet -- but there's not much reason to think it will look much better when the year is over. The game against Samford is the only sure win left on the stadium, and Kentucky might very well be the underdog in the other five. (They are an 18.5-point underdog at Arkansas. I will repeat that: Kentucky is an 18.5-point underdog at Arkansas, which means that Arkansas would likely be favored by two touchdowns at a neutral field.) 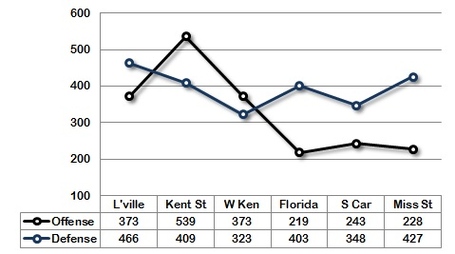 This is not to say that Joker Phillips' story is not inspirational on some levels; it is. Phillips is the second black head coach in SEC history, a Kentucky player and longtime assistant (he has spent only six seasons of his 24-year coaching career somewhere else) and one of the few examples where the head-coach-in-waiting arrangement actually seemed to work.

But at some point, inspiration actually needs to yield results. Coaches are not hired to be Hallmark Channel movies. And Phillips has taken the team from a level where Rich Brooks worked hard to get them -- and was never really satisfied -- to a level that is somewhat closer to the probation-wrecked first part of the Brooks Era than the boon years. At this rate, Phillips is on track to have the worst season since before Brooks came to Kentucky. This is whatever you call the reverse of a rebuilding job.

At the same time, no one should underestimate the very real challenges any coach would face at Kentucky. Lexington is a basketball town and will remain a basketball town -- for at least as long as John Calipari stays in the college ranks. That matters. It's harder to get players and particularly coaches to come to a school when they know they are going to be the second-biggest sport on campus, when they know they would be the biggest sport at most other colleges in America.

Just because the job is difficult, though, doesn't mean that the Wildcats have to stick with a coach who seems to have proven that his ceiling is "mediocre."

This isn't a call to fire Joker Phillips; Kentucky fans and the administration are more than capable of having that conversation amongst themselves. But if Kentucky does decide to part ways with Phillips at the end of the season, it will not be because they didn't give him enough of a chance. It will be because he didn't give them enough reasons to give him another chance.