Georgia's young offensive lineman might have been tipping off the defense against South Carolina.

Share All sharing options for: Watch Georgia's Tackles to Know What Kind of Play Is Coming Up

Earlier this year, Western Kentucky's coaching staff noticed that Alabama tackle D.J. Fluker tipped off whether the upcoming play was run or pass based on his foot placement. They claimed to be about 90% correct when checking on him.

After looking closely at the tape of Georgia against South Carolina, I think something similar might be going on with Georgia's true freshman right tackle John Theus.

Now, not all two point stances are the same. The lineman's back can be somewhat upright, like you'll see here from both of UGA's tackles, Theus and Kenarious Gates. Sorry the picture is so small, but it's taken from the video box score of the game. 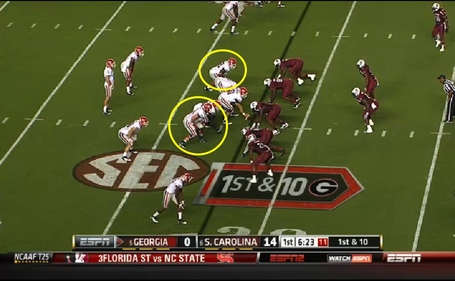 Gates is still fairly low, but Theus's upper body is about at a 45 degree angle. Compare that to these stances from the tackles: 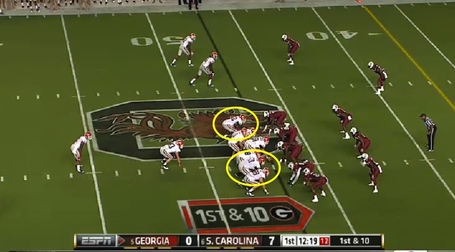 Theus is actually in a three point stance here, while Gates is in a two point stance. However, Gates's is upper body is still almost parallel with the earth despite not having a hand on the ground. Gates gets low on most plays like you see here, but Theus fluctuates a lot between being more upright and getting lower down.

Here are the raw numbers that I picked out from watching the team's offensive plays. I will note that these won't match the number of plays in the box score exactly on because on one pass and six run plays, I was not able to determine the tackles' pre-snap stance due to ESPN's camera work. 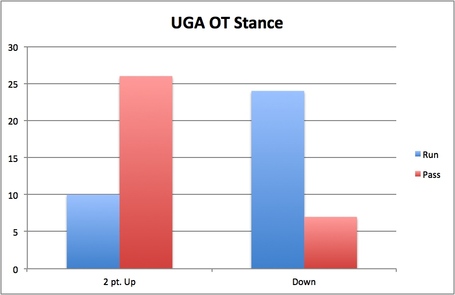 This is somewhat misleading, however, because four of the runs that happened with Theus in more of an upright stance came late in the fourth quarter when UGA was just running out the clock with Ken Malcome. If you eliminate those from consideration due to them coming in garbage time, here's what they come out to be: 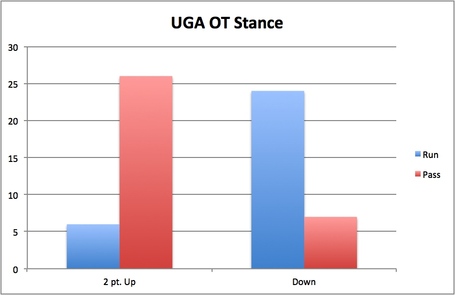 There are many reasons why UGA lost so badly in Columbia. Aaron Murray was off all game. In particular, his inability to make the Gamecocks pay for their blitzes with accurate throws on the bubble screen was disastrous for the offense. South Carolina's defensive line is also a big time chore for anyone to try to handle.

However, it's possible that Theus was giving the Gamecocks a sign way more often than not as to what kind of play was coming up. If I had more time I would go through all of Georgia's previous games this year to see if the pattern holds, and if it does, it's a bad sign for future games against good defenses.