Ole Miss is Getting Better. But There's a Lot of Better to Be Gotten

There's actually been quite a bit of improvement in Oxford this season. Whether it's going to lead to additional wins is another question entirely.

Share All sharing options for: Ole Miss is Getting Better. But There's a Lot of Better to Be Gotten

Ole Miss is probably right about where most of us expected them to be around this point of the season: 3-3. The three wins are against Central Arkansas, UTEP and Tulane; the defeats come from Texas, Alabama and Texas A&M. All of that could have been predicted by almost anyone with a modicum of information about where the program stood. Why, then, does it feel like the Rebels are at least a little bit better than we thought they would be?

Consider Ole Miss' statistics last year at the midpoint of the season vs. this year. (For reference, the schedule then included BYU, Southern Illinois, Vanderbilt, Georgia, Fresno State and Alabama -- so it was at least not significantly stronger than this year's slate.)

Aside from passing yardage defense, that's basically across the board improvement for the Rebels. Stout improvement in rushing defense (opponents yardage down almost 32.3 percent) keyed a big reduction in the yardage given up by Ole Miss over the first six games. Total offense is up more than 74 percent on a per-game basis over last year. Those kinds of jumps in tandem suggest something more than a tweak here or there -- they suggest real, tangible improvement.

Thing is, it's not showing up on the scoreboard. And it might not for a while yet. It's useful to remember just how ramshackle a team the Rebels were last year. They scored more than 13 points against FBS competition three times last year -- and lost two of those games. Ole Miss scored just once in five different games last year. (I assume I needn't tell you they lost all of those.)

And the truth is that more improvement on the defensive side of the ball is needed. The Rebels still rank 10th or worse in the SEC in passing efficiency defense, passing yardage defense, total defense and scoring defense. Rushing defense clocks in at ninth in the conference. Offense is nice and all, but stopping teams is still primarily how you win games in the SEC.

The averages also obscure the fact that Ole Miss' progress has been -- we'll call it uneven. 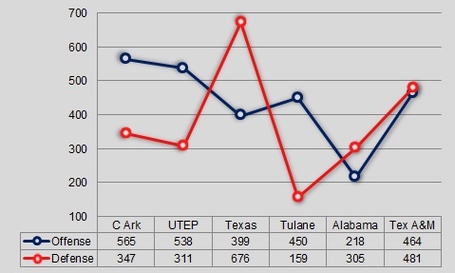 You could argue that this might mean Ole Miss is doing better by simply doing as well as it should against the teams it should defeat -- Southern Illinois, for comparison's sake, gained 420 yards in 2011 -- but there's something more than that at work. Alabama's yardage total was essentially cut in half from last year's blowout, despite the fact that the Tide's offense was not slammed with attrition the way the defense was. It's hard to know what to make of the wild swings from game to game.

So for now, it's probably best to withhold judgment on whether the improvement, which seems real, is going to provide a 13th game for Ole Miss fans this season. There are two excellent shots for a win in the latter half of the season, but the Rebels might need to spring an upset to get to .500. That they are even in the conversation indicates that Hugh Freeze is doing something right.