Share All sharing options for: Ballotry: C&F's Half of the BlogPoll Ballot

This makes me nauseous. But Clemson has a lot of quality wins so far and no losses. If I were ranking based on power poll methods -- which I'm not -- both of their top wins would be ranked, and Troy is a decent midmajor. So here's Clemson. In the Top 5. I hate it. The rest, of course, is pretty nondescript. I'm not going to chew over the LSU-Alabama debate too much right now. I looked hard at Alabama-Oklahoma, but I think the fact that they have one more win gives Alabama the slimmest of advantages over the Sooners. Oklahoma State benefits from having the win over Texas A&M and a pretty solid midmajor in their pocket. But that Arizona win is losing cachet fast.

All kinds of weirdness going on in this part of the ballot. Boise State is pretty standard. Florida has a nice win against Tennessee and clobbered Kentucky; I think both of them might be just better than the two best wins for Nebraska. South Carolina is up here based solely on the names and the scores; their performance in some of those games was awful. Again, if this were a power poll, I wouldn't have South Carolina in the Top 10 and maybe not in the Top 15. Then again, I also wouldn't have Clemson in the Top 5. Michigan is another one that benefits from a solid resume at a point of the year when it doesn't take too much to have a solid resume.

Obviously, Wisconsin is massively underrated here, but largely because they haven't played anyone yet. If they beat Nebraska next week, they will zoom up my ballot. Stanford also needs some more quality wins. I had a hard time placing Georgia Tech. North Carolina is decent and Kansas is awful -- but, man, the Jackets just destroyed the Jayhawks. And the teams below them have some issues. Like Illinois, which has a nice win over Arizona State but also struggled with Western Michigan. And Arizona State, which has a couple of nice wins but not nice enough to put them ahead of an Illinois team that defeated them.

Most of these teams "should" be higher or lower. South Florida is actually right about where they might be in a power poll. Oregon would be much higher and should start moving up as the wins improve in quality. I so badly wanted to leave Southern Cal and Texas off the ballot, but I can't find anyone that have won enough to replace either team. Auburn faces a big game this weekend; I can see ranking them much higher if they beat South Carolina, but it's going to be hard for them to hold on if they lose.

I really had a hard time getting to 25 this week, and this section shows that. Kansas State is sort of a "who else?" pick, and everything else goes from there. Baylor is still living off the TCU win, while Iowa State's signature wins are just enough despite continuing to be a case of having two wins. Texas A&M really shouldn't be in the poll based on their resume -- but who else are you going to put there? Houston is an almost-obligatory second midmajor. 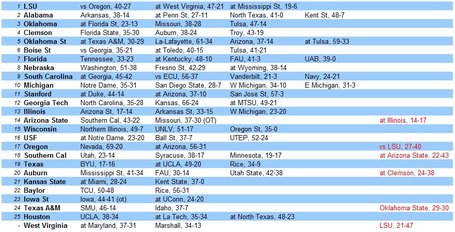