Ballotry: The Team Speed Kills BlogPoll Ballot and Its Discontents

Share All sharing options for: Ballotry: The Team Speed Kills BlogPoll Ballot and Its Discontents

First, the BlogPoll deadline has been extended to Tuesday morning, for which I am grateful. These will generally be posted earlier -- say Sunday evening -- so you can have 24 hours or so to respond. In case you missed it, Year2's half of the ballot is here.

Most of the more bizarre parts of this ballot are my fault; more on that in a moment. Ties broken: LSU-Oklahoma through SEC homerism; Stanford-Boise-Oklahoma State, because I admit that OSU is overranked on my ballot and Stanford had the highest rank on either ballot (i.e., their rank on my ballot was higher than Boise's on either ballot); Arkansas-Florida, because Arkansas was more highly rated when we started this; Iowa State-Michigan-Baylor, because I made a judgment call on Iowa State and Michigan and the rest should be self-explanatory; TCU-Texas, just on principle; Illinois gets in over Georgia Tech because Illinois was the only one of those two on both ballots.

Now, for my ballot. Buckle up, folks, this one is going to be fun.

First, we've got the split on what came for the power-ish poll and what came from the resume poll -- which counts twice this week. Next week, it's all resume, and the real fun can begin. 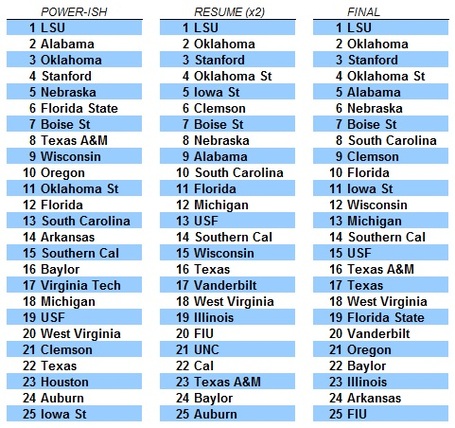 On balance, I think LSU's best two wins are better than Oklahoma. The Sooners didn't overpower Florida State the way LSU overpowered Oregon, and Mississippi State is a better scalp than Tulsa almost regardless of the score. (Though Tulsa is a very good midmajor.) Oklahoma State is this high because they have the aforementioned Tulsa win and ran Arizona out of the stadium, and that's enough at this point in time. They also haven't played an FCS team, and I've decided to no longer consider FCS teams on the resume chart that I use, so they have three wins that "count." Alabama is lower because Penn State just nearly lost to Temple, whose coach is Steve Addazio, and all the other games are unremarkable body bags.

Pretty much everyone here has at least one BCS win and a quality midmajor win or a laugher over a midmajor. I don't dock South Carolina too heavily for playing two quality midmajors, though they probably should have looked better in both games. You'll notice that they're considerably lower on my power-ish poll, which is based on how good I actually think a team is.

All of these teams are ridiculously overrated because they've played and defeated actual competition, except Wisconsin, which is underrated because it hasn't. Or maybe none of them area that far overrated or underrated. Again, resume polling is a process in evaluating teams that tries to remove subjectivity from the ballot as much as possible, and all we really know right now is that Wisconsin is great at beating really bad teams and these others are undefeated despite actually challenging themselves a bit.

The fans who want to complain because their teams are way down here should talk to their athletics departments about scheduling. Florida State doesn't even show up on my resume ballot, because they don't have a valuable win of any kind. Texas A&M has a couple of nice wins over midmajors. I think this is about the peak for Texas, because I don't think the Longhorns will win more than eight games this year, and the same might be true of Vanderbilt. We'll find out soon enough.

If Arkansas wins this week, they'll zoom up the resume ballot and will be well-served by the process. If they lose, they're not getting back on the ballot until they have a win over some form of at least BCS-quality opposition. The same goes for Oregon. The rest of these guys have some nice wins, though Baylor really only has one FBS victory (against TCU). And, yes, I'm ranking a Sun Belt team.

Finally, the resume chart that helped produce this slop: 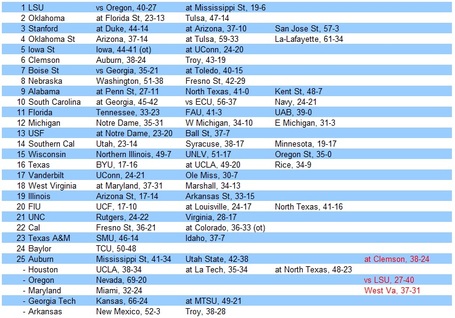