Ties broken: Wisconsin-Oklahoma State, to keep status quo for the Badgers; South-Florida West Virginia, because; Auburn-Michigan State-Houston, through the SEC homerism bonus and because I actually agree with Michigan State over Houston for now, but they don't appear on my final ballot because of the weak resume.

I might be talking out of school here, but I'm going to say it anyway: I think that moving the deadline for the Blogpoll to Monday morning is a mistake. I'm the kind of voter that spends several hours Sunday trying to put together a very carefully crafted ballot, with the result that I often don't get it posted until late in the evening. Thing is, I want to hear your comments and try to respond to them, if necessary, to submit a better ballot. So I'll try to get these out as early as possible in future weeks so that you can have at them. But the new format, I'm afraid, takes away some of the perspective and debate that made the Blogpoll valuable and different.

That said, here's what I came with this week. Again -- power-ish ballot counts twice and resume ballot counts once, with no corrections. 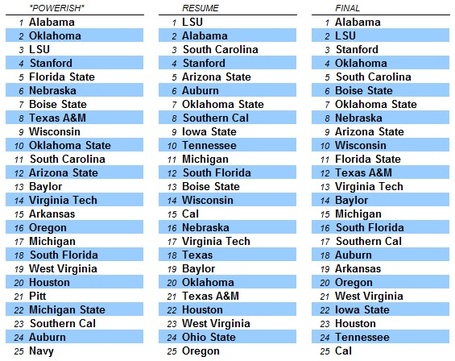 Because there's so little resume data this week -- and some teams that will be bad are winning against teams that are probably overrated or are at least better than FCS cannon-fodder -- some of the results are a little odd. I admit that before I get to analyzing some of the results, but that's the major caveat.

Oklahoma has played one midmajor and taken a week off, which is why they're at No. 4 here. Once the resume improves as more games are played, they'll likely move back up into the Top 3. South Carolina -- yeah, let's talk about that. First of all, this is not a homerism pick -- I'm terrified that this will put the Gamecocks in line for the dreaded CK award in the Blogpoll, which is the last thing I want before South Carolina plays Navy. But the rules are the rules, and the resume is pretty stout, so South Carolina moves to a place that I don't even really think they deserve.

The Badgers were one of the most difficult teams to place, because I think they're an elite team this year, but they haven't beaten anyone. Oregon State lost to an FCS team before it lost to Wisconsin, and UNLV got blown out by Washington State after Wisconsin dismantled the Rebs. So the resume is weak and hurts them here. The resume really helps Arizona State after a decent win this week, so up they go. I'm curious to see how Boise's schedule might hurt them as time goes on.

Don't get angry with me, Florida State fans. I'm not the one that scheduled the Greater Tallahassee Pastry Festival for the first two weeks of the football season. Nothing else here is that surprising, though I think I might be a bit high on Michigan right now.

Why is Arkansas No. 19 on my blogpoll ballot? Look at their schedule. Most of these teams are in transition -- I don't expect them to be in these spots much longer.

Iowa State has defeated a Big Ten team, which is one of the reasons they're here. Tennessee? Let's see what happens next week. Cal has a couple of interesting wins that are hard to place.

Here's the resume chart, with the Top 30 included. 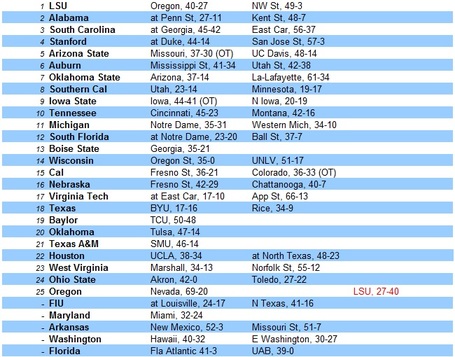