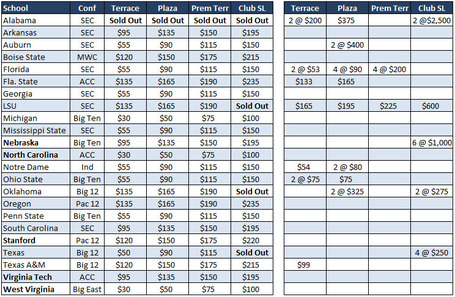 The last time we peeked in on the 2012 BCSNCG ticket reservation system was two months ago in the heart of the off season when plans for the Fourth of July weekend likely eclipsed concerns about getting a seat in the Super Dome on Jan. 9. But with the college football season just more than a week away it seemed like a good time to check it out again.

Just to remind folks, the Team Ticket Reservation Marketplace is being run by the Sugar Bowl. This is the mechanism by which you can purchase a reservation to buy a ticket to the 2011 BCS National Championship Game for a specific team. If they get in, you get the right to buy your ticket at face value. If they don't, you are out the cash.

There have been a few changes. New teams with fans feeling some need to purchase insurance on the off chance their squad makes it to the championship are Nebraska, North Carolina, Virginia Tech and West Virginia. No new sections have sold out since the last update.

The system sets the baseline price of the reservation by the team's current poll standings so, for the first time we've seen a bit of shuffling in the costs. Florida State, for example, went from a non-ranked price scheme to a top five price scheme overnight. That terrace ticket reservation that cost $55 last week is $135 now.

The SEC still has by far the most teams represented on the list - eight. That's twice as many as runner up, Big Ten. Interestingly the SEC teams represented are the same eight who appear in the AP Top 25. In fact the only teams with a reservation purchased who are not listed on the AP or USA Today Coaches poll are Michigan and North Carolina. Conversely, the highest ranked teams not represented on the marketplace are Oklahoma State, Wisconsin and TCU.