While offensive red zone production is touted by coaches as a critical ingredient toward success, the success to keep your foes from scoring from within the 20-yard-line is undoubtedly critical as well.

Case in point, Ole Miss. Yesterday we saw the Rebels were actually quite good inside the red zone last season - sporting the conference's third best percentage. Yet, on the other side of the ball they were simply atrocious, allowing opponents to come away with points almost 95% of the time they got past the 20. The worst percentage in the conference over the past five years.

Here are the red zone defense percentages for the SEC from last season. Keep in mind, the graph is reversed from yesterday so the teams located closer to the top are those who performed better (their opponents recorded a lower red zone scoring percentage). 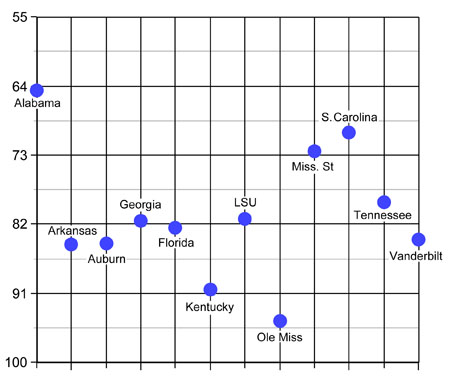 Again, the power of the Alabama defense to keep folks from scoring is pretty obvious. Also of interest is the good showing from South Carolina - a team whose defense is traditionally seen as suspect - and Mississippi State - who are often written off as a back-of-the-pack squad.

Like yesterday, we look in more detail at each team's defensive red zone stats after the jump.

Note: These graphs show the amount of opponent red zone conversions. The dark color being touchdowns, the light color being field goals and the grey meaning no score. Thus the taller the bars, the less effective each team's defense was. They represent the opposite of the team graphs from yesterday.

Alabama's defense took a slight step back from the red zone dominance it exhibited during the Crimson Tide's national championship run but not enough to topple it from the standing as the best in the conference within the 20-yard-line. The Tide saw the fewest RZ attempts, scores, score percentage, touchdowns and touchdown percentage of any team in the conference last season.

Arkansas got a bit better keeping folks out of the red zone last season but were a little more likely to let those teams from come away with six points. Auburn demonstrated exactly how much you can overcome with a high-octane offense - only Vandy and Kentucky let folks score more often than the Plainsmen from within the 20. And that was an improvement over the year prior.

As much grief as the Florida offense absorbed for it's woeful performance in 2010, the Gator's defense wasn't up to the level of previous seasons either. It marked the worst red zone performance by Florida since 2007. Georiga was also washed up on the shores of futility in 2010. While the Bulldogs were a bit better at keeping teams outside the 20-yard-line they were far worse at keeping those foes from scoring touchdowns once they got there. Kentucky's red zone performance was simply gawdawful in every possible way.

LSU's red zone defense in 2009 was the defenition of bend-but-don't-break. The Tigers allowed teams within the 20-yard-line 41 times but only allowed touchdowns 31% of the time - the best rate in the conference over the past four years. 2010 was a step back for LSU as teams getting in the red zone found it a bit easier to subsequently reach the goal line.

South Carolina was actually second best in the SEC in terms of defensive red zone scoring percentage but that success story was muted by the Gamecocks inability to keep opposing offenses outside of their own 20-yard-line. Only Kentucky allowed opposing offenses in the red zone more often last season. Tennessee wasn't much better and added to their woes by being less effective at stopping touchdowns too boot. Vanderbilt was only prevented from scraping the bottom due to Kentucky.