Share All sharing options for: Was Urban Meyer the Key to Florida's Offense -- or Tim Tebow? // SEC 2011

When Urban Meyer came to Florida in 2005, there was one question that divided SEC fans: Would his spread/hybrid offense work in the conference? Less than four years later, after Meyer had won two conference titles and a pair of national championships to go along with them, the question seemed more than a little bit ridiculous.

In fact, by the time last season began, Meyer had posted 13-1 records in three of the last four seasons. The only exception was a 9-4 year in 2007 that could only be considered subpar in Gainesville. The Meyer offense was on a roll that would have been unprecedented if Steve Spurrier had not coached at the same school just a few years earlier.

Then there was last year. In 2010, Florida's offense cratered to the point where the team ranked 82nd nationally in total offense, 10th in the SEC. Only LSU and Vanderbilt were worse. The malaise that set in around Florida's offense could be distilled into a single frame. The Meyer offense, or whatever was left of it, had disintegrated. 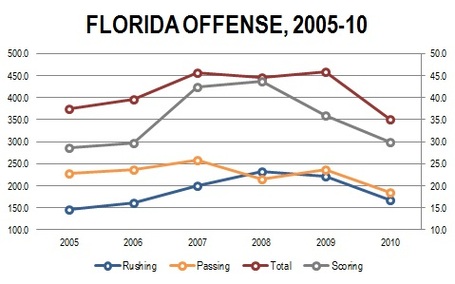 That's a pretty clear trend line there. What happened between 2007-09? Those would be the years when Tim Tebow was the starting quarterback at Florida. There's a slight uptick in the rushing numbers from 2005 to 2006 -- when Tebow would sometimes spell Chris Leak on running plays -- before the number shoots up in 2007. The passing numbers slip a bit in 2008, in part because of an increased emphasis on the run, but overall, things are going pretty well.

Then, Tebow leaves for the NFL, and things head downhill fast. The rushing offense returns almost to its 2005 form. The passing offense craters along with it. That leads to a dramatic decline in total offense and a predictable result in the scoring offense category. Though, in fairness, the scoring offense had declined by about eight points a game from 2008 to 2009.

That's not the whole story, of course. Something else happened before 2008 and 2009. Offensive coordinator Dan Mullen became the head coach at Mississippi State, and Steve Addazio took over. Of course, Addazio was the one responsible for the photo linked to above. He took a well-tuned symphony and turned it into a collection of instruments playing very loudly, but without any real coordination.

Which leads us back to the question of what happened to the Urban Meyer offense. After all, he was the one constant through the years of ups and downs. Year2 has argued before that the concept of "the Urban Meyer offense" is a bit flawed, and that's true as far as it goes. But if Meyer simply adapts his offense to the personnel, then what happened to that ability during the Leak and Brantley years? (Florida didn't really win the 2006 national championship on offense, which was actually slightly worse than the 2010 edition in terms of scoring and only slightly better in terms of yardage.)

But Meyer was brought into Florida to retool an offense that was sluggish under Ron Zook. On some level, it was Meyer's offense to steer, no matter who was the offensive coordinator. It was certainly Urban Meyer's offense if nothing else.

When Tim Tebow was there, Meyer was an offensive genius who managed to craft an offensive machine. When Tebow wasn't on the Florida sideline, Meyer seemed to struggle to put together a game plan that played to his team's strengths. Maybe it's time to acknowledge that the two are probably connected.