No matter how many yards an offense can rack up, unless there is consistent success in the red zone it's of limited use. When a team gets inside the 20-yard-line points have to be put on the board.

"The red zone is the most important place on the field to play well,"  The good folks over at Football Outsiders insist since plays in that fifth of the field has a disproportionately high importance to the outcome of the game. Waste that opportunity and you are not only without points, your drive has burned up play clock and you've limited the ability to make points later in the game.

Intuitively, nothing makes more sense yet when you break the thing down it can get a little perplexing. And nowhere is that more true than the SEC in 2010. To wit, Arkansas, Georgia and Ole Miss led the Southeastern Conference in red zone efficiency last season. Auburn, the eventual national champions, came in fourth.Yes. the Rebels were more efficient in the red zone than the Plainsmen last season. 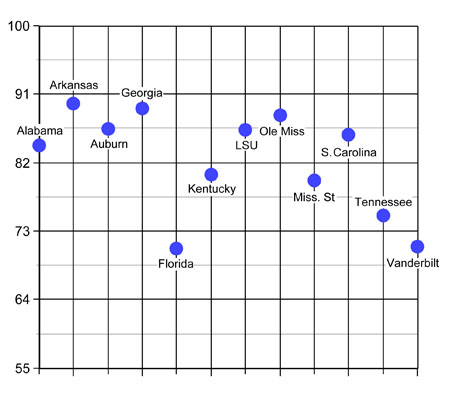 The problem, obviously, is the number of factors any single set of data represents. A team could have a high red zone efficiency but only because they rarely gets within the opponent's 20 or, when they do, tend to come away with field goals rather than TDs. The result are oddities like 1-11 squads being No. 2 in the nation for the statistic.

So in hope of gleaning a bit more information about these numbers, after the jump are charts for every SEC school looking at the total number of red zone attempts broken down by touchdowns, field goals and failed efforts.

Note: In every graph below, the dark color in each graph shows total red zone touchdowns, the light color represents red zone field goals and the grey is the number of failed attempts.

Alabama actually saw a significant improvement in red zone production. In 2009, the Crimson Tide scored touchdowns less than half the time they got within the 20-yard-line and last season that jumped to 63% of the time. Overall attempts dipped slightly. Arkansas, though, was easily the most efficient SEC team in the red zone, coming away with points almost 90% of the time. Regrettably, their overall number of attempts were tied at ninth in the league with Mississippi State.

Again, if you need any evidence on what the combination of Malzahn and Cam Newton will do for an offense, here you go. The Plainsmen got into the red zone more than any other SEC squad last year, and their fourth best score percentage did the rest.

One of the perplexing problems that afflicted the Florida in the wake of their 2008 national championship was the team's ineffectiveness in the red zone. In this category, last season marked a slight improvement for the Gators in terms of touchdowns scored (both by number and percentage). But the field goals shrank considerably, perhaps due to greater scoring success. Red zone success was one of few bits of good news for Georgia in 2010 as the bulldogs saw notable improvement. Kentucky also continued an upward progression in the category.

LSU traveled to the red zone more times last year than they had seen since the days of JaMarcus Russell, regrettably, sealing the deal remained a problem. The Bayou Bengal they settled for a field goal more often than any other team in the conference. While LSU took the three points a full third of the time they got within the 20-yard-line, Ole Miss was right behind them with just a smitgen under 30%. While Mississippi State's score percentage languished at the bottom of the league, their number of red zone attempts and percentage of touchdowns took a noticeable step forward.

The Gamecocks saw how much a running back threat could help red zone efficiency with a noticeable boost in red zone attempts and touchdowns courtesy Marcus Lattimore. While the incremental uptick in production the season prior could be due to Stephen Garcia's maturity as a passer, it's Lattimore that kicked things into a higher gear.

The Volunteers, meanwhile, saw a surge in red zone productivity during the Kiffin regime but returned to woeful levels again last season. The Commodores consider the lands beyond the goal line about as remote as Shangri La.