There's nothing unusual about the Barnes & Noble bookstore itself. In fact, when you first walk in, it takes a moment to see the display dedicated to what's made the surrounding city so famous, to what brings people there by the thousands for four months each fall.

The city is Tuscaloosa, and the display is devoted to Alabama books and memorabilia. And just a few blocks away, parts of the city landscape are flattened expanses of dust where buildings used to be, with only the odd house or other structure holding onto the ground. That normal Barnes & Noble is just a few thousand feet away from where a tornado ripped through Tuscaloosa on April 27, killing 44 people and upending life here -- as a spate of similar storms tore up Alabama and killed at least 243 people in 19 counties. Tuscaloosa County's death toll was the highest. 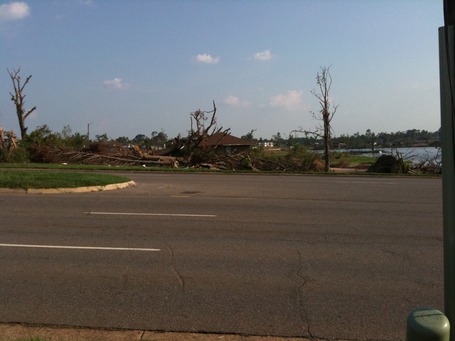 But back to the bookstore for a moment. On the side of that Alabama football display -- the few Auburn items are across a small aisle, apparently to avoid cross contamination -- is a book called "Day of Devastation." The book is a collaborative project among the papers for three of Alabama's four largest cities, which gives you an idea both of the scope of the tragedy and how tightly the state's people are pulling together.

Its placement right next to the tomes on Alabama's rich football history seems far from an accident. There is no magic bullet for recovering from a storm like the one that devastated Tuscaloosa on that April day. But for a city like Tuscaloosa, where the Alabama football program is all but woven into the community's DNA, the approach of the 2011 season will do more than its fair share to help people put it behind them.

If there is anything weightier to SEC Media Days than the relatively light-hearted nature of the gatherings -- this is a bunch of reporters asking football coaches and players about playing a game -- it is that football season is on the horizon. And for a pigskin-crazed state looking for any kind of distraction from a clean-up and recovery effort that's still very much an active process, it can't get here soon enough.

The event is being held in Hoover, a suburb of Birmingham in Jefferson County, right next door to Tuscaloosa County. Jefferson County lost 21 lives in the outbreak of tornadoes in April, a number that would have been staggering in its own right if the rest of the state weren't producing its own drumbeat of fatalities.

It comes at the end of what has been far from the most glorious offseason for the state's two major programs. While Auburn basks in the glow of its first BCS national title, it still faces the NCAA investigation of Cam Newton's recruitment and the avalanche of accusations that followed in an HBO special. And Alabama fans have spent more time than they would like distancing themselves from Harvey Updyke, a man whose unhinged obsession with Alabama football allegedly prompted him to poison Auburn's famous trees in a move that caused an outpouring of sympathy for Auburn even from Tide fans.

So in a way, the approach of the season produces an opportunity both for football in Alabama and the communities devastated by the 2011 storms. The former can redeem itself and, in so doing, can help the latter recover.

And if you don't think that a simple game can help a state recover from storms -- well, you've never met a football fan from Alabama.

His first indication that something was very wrong was when he went to close the door after a customer had left. At the time, in 1989, my father was managing a drug store in Huntsville, Ala. -- a few hours northeast of Tuscaloosa -- and he simply thought a strong wind was keeping the door from closing.

The door was gone.

My father called all of his employees and told them to join him at the same spot in the store. When the store collapsed, a seam in the roof above them opened up a hole where they were standing. That hole likely saved their lives; 21 others weren't as lucky.

I was nine years old at the time. I remember watching my father on camera in the November evening, talking to a television reporter about what had happened. And I remember going down to Airport Drive a few days later for my father to get some things from his gnarled car, thinking to myself that this must be what a war zone looks like.

And I remember being terrified every time as a child that the next severe thunderstorm would be the big one that would bring a deadly tornado with it. 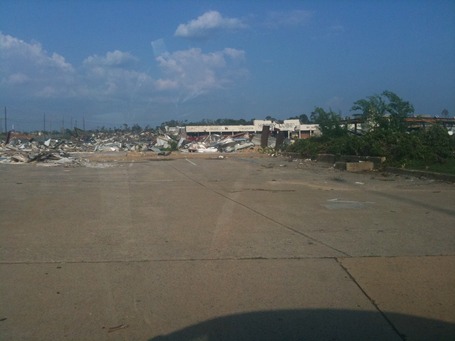 The important thing is that it missed the stadium. Not by much -- only a few blocks separate Bryant-Denny Stadium from some of the storm's worst damage.

It's not necessarily fortunate because it means the resumption of football, said Bo Hicks, who helps run a Tuscaloosa entertainment blog that teamed up with Roll Bama Roll on the Sunshine Express relief effort. Hicks is an Alabama fan, but some of his relief at the stadium's survival is more practical.

"It would have set the city that much further back without having that extra revenue," Hicks told me recently at the grocery store for which he is a food buyer. The store was closed for four days after the storm.

In fact, the Tide's home football games generated an estimated $101.4 million in economic activity for the Tuscaloosa area alone in 2008, the most recent year for which numbers are available, according to a study by the university [PDF]. A damaged or destroyed stadium sends those games to Birmingham or somewhere else. Maybe they need the money and the recovery, too, but probably not as badly as Tuscaloosa does.

And there's also the emotional lift.

"It'll be something positive that people can think about instead of just all the destruction," Hicks said. "And I think they're ready to think about something else."

The storm spared at least that much for the people of Tuscaloosa. Part of what makes tornadoes so frightening is that there's no apparent rhyme or reason to what gets hit and what gets spared, to who lives and who dies. There were places in Tuscaloosa where one side of the street would be almost untouched, while another was hammered by the tornado.

Hicks' old home was swept away, with only the slab left when he went to look at it after the storm. A mile away, in their new home, he and his wife barely avoided the edge of the storm. He openly wonders what might have happened if the storm had hit before his move, and if the employees had gone home early the way they did that day because of the danger ...

What is less understandable is what wasn't spared, the dozens of lives that are gone now. As I stood in line at Barnes & Noble waiting to buy "Day of Devastation," I begin looking at the county-by-county death tolls to check the estimate Hicks had given me. (He was closer than the book, but both were off because of the latest addition.) I noticed that some of the listings took up two lines on the four-column pages instead of one.

It was because their ages needed clarification. They needed to have "months" added, because they weren't old enough to have their time on this earth measured in years.

As I scanned closer, I found a similar entry that didn't need the extra line. "Caiden Blair, 2 months."

I doubt that a football game can bring any real comfort to Caiden Blair's family. But I doubt that anything else on this earth can do it, either. For the rest of Tuscaloosa, though, maybe it can bring some measure of hope for a better future. When your present lies around you in pieces, that's no small consolation.

For the most part, those concerns go unmentioned in Tuscaloosa County. I ask Hicks if people still talk to each other about the storms a lot. "Not as much," he said. After all, Hicks later points out, what is there left to say?

"You still think about it a lot," he adds.

That shows up in the reaction of the cashier at Best Buy, when I try to strike up a quick conversation about the town's recovery. He seems a bit hesitant, but when I suggest that everyone's still excited about football season, he quickly agrees. A distraction, he says, echoing Hicks and a cliche that still seems truer than ever.

Perhaps Hicks puts it best. "I'm ready for something that's going to make me feel good again," he says.

So are many of the people in Tuscaloosa and across the state of Alabama. If SEC Media Days is the unofficial start of football preseason, it did not come a moment too soon.