Illustration on How Georgia Struggled Against the Option in 2010

Share All sharing options for: Illustration on How Georgia Struggled Against the Option in 2010

In my review of last year's Florida-Georgia game, I mentioned that Georgia's defense struggled against the option. I think this will show you exactly what I'm talking about. It's Florida's first touchdown in the game, a 20-yard run by Chris Rainey. You can click all of the pictures to make them a bit bigger. 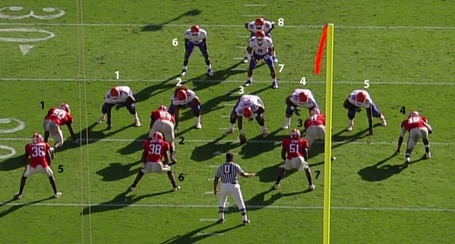 This is a look at the setup for the play. Something should immediately pop out to you: Florida has eight men in the main part of the formation, while Georgia has only seven in the box. By choosing not to block Darryl Gamble (No. 50), that gives the Gators a two-man advantage where the action is happening. Safety Bacarri Rambo is the closest other guy to the play, but he's 10 yards back of the line and wide of Justin Houston (No. 42). As long as the blocks hold, this play has a phenomenally high chance of succeeding.

Let's go forward a bit to see how this develops. 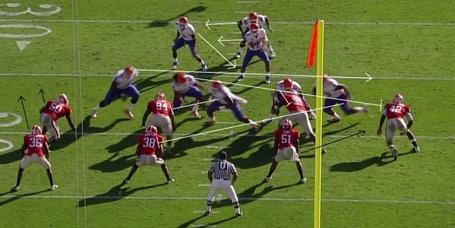 It's a bit busy, but here's the gist. Rainey is the dive back, while Omarius Hines and Trey Burton will head to their right for the option. Gamble and Shawn Williams (No. 36) will head out that way to take care of those two, which is good, but it means the rest of the play is completely covered.

You see, Marcus Dowtin (No. 38) has the middle and Akeem Dent (No. 51) has the left edge. Unfortunately for UGA, LT Marcus Gilbert is coming for Dowtin and will open up the middle. Dent runs out to the left in case it's a sweep and not a dive, but as it's a dive, he runs himself out of the play. RT Maurice Hurt is coming out there to block him anyway, and RG Jon Halapio is coming over to block DE Justin Houston (No. 42). 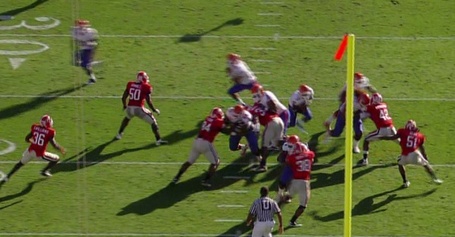 No scribbling necessary on this one. Rainey has the ball and is hitting the hole. Dent on your right and Williams on your left have figured out that Rainey has it, but they're off balance and can't recover by the time Rainey passes them. Every single Georgia defender is either blocked or has run himself out of the play by keeping to his assignments.

That's what makes the number advantage critical. Georgia had four guys assigned to three potential ball carriers, but that's not good enough to stop the option when the offense has a one-man advantage. The only way this could have gone Georgia's way is if Dent was also covering the middle with Dowtin, either stopping Rainey there or flushing him outside where a defensive back might get him. Even then, Hurt is heading out to the left edge to block, so Rainey is still going to pick up some yards. 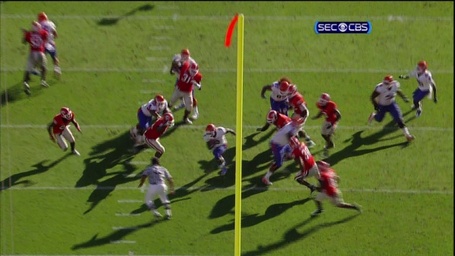 This just shows how big the hole got. Streaking in the play from your left is Rambo, but Rainey is 10 yards up the field already. Rambo takes an angle assuming that Rainey will continue running straight ahead, but the ball carrier veers to his right to make the safety's angle a bad one. Eventually CB Sanders Commings, who had been lined up on a receiver out wide to the offense's right, does make contact with Rainey, but he misses the tackle at the seven yard line. Rainey strolls into the endzone upright.

Now, I don't know enough about Georgia's defense from last year to say who is at fault here. However the defense was playing this as though Burton was a threat to pass the ball, but he had thrown just one pass all season at this point. There was no reason to be a man down in the box against that formation with that guy at quarterback. Either the coordinator on the sideline or a captain on the field failed to adjust the defense to counter the offensive formation. This was just a base 3-4 set with nothing special done for the option specifically. The same was true of the defense when Burton broke off a 51-yard option keeper for a touchdown in the fourth quarter.

Perhaps this fall, in the second year under Todd Grantham, the right adjustments will be made. Something must be done though with option heavy teams like Mississippi State (24 points, 4.1 YPC in 2010), Auburn (49 points, 463 total yards), and Georgia Tech (34 points, 512 total yards) on the schedule again. Maybe Grantham was just rusty in his option defense last year as I speculated, but he better find some WD-40 this summer.

Here's a look at the play in motion: