Whatever the woes that beset Georgia last season, the performance of the Bulldog's special teams units were not among them.

Kicker Blair Walsh was good for 20 of 23 field goal attempts, had the highest kickoff average in the conference, broke the school record for consecutive extra points and even notched up one solo tackle. Punter Drew Butler booted 14 punts for more that were longer than 50 years and saw 19 downed inside the 20-yard-line. On the other side of the ball, Brandon Boykin averaged a very respectable 24.26 yards per return.

All three return for their senior seasons in 2011 prompting no less than Phil Steele to declare the Bulldogs "the best special teams unit in the country." Dawg Sports, in their season preview magazine, concurred.

Still, stellar special teams is only one seventh in the recipe for gridiron success. While the Bulldogs had solid special teams Year2 noted "It didn't win them extra games last year though." The difference, perhaps, is that special teams can be the deciding factor and it's better to have a unit you can put confidence than just throwing your fate to the winds of chance.

With that, here's a look at the special teams performance across the SEC for last season. As usual, the primary source of the data is the NCAA records compiled by CFB Stats. 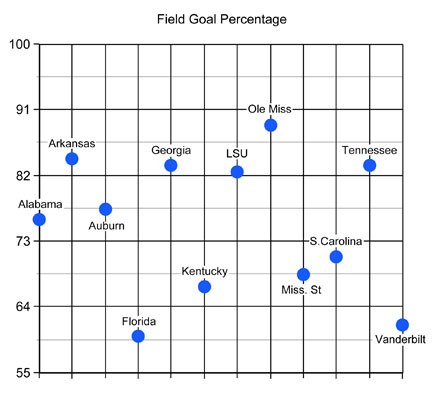 One of the problems with trying to analyze special teams performance is the bugbear of small sample size. Ole Miss led the SEC in Field Goal Percentage but only attempted 18 over the season. LSU, by contrast, attempted a conference-high 34 field goals and still ended up in the top half of the league (5th) in terms of scoring percentage. Florida's loss of kicker Caleb Sturgis to injury forced the Gators to press punter Chas Henry into placekicking duties to lamentable results. 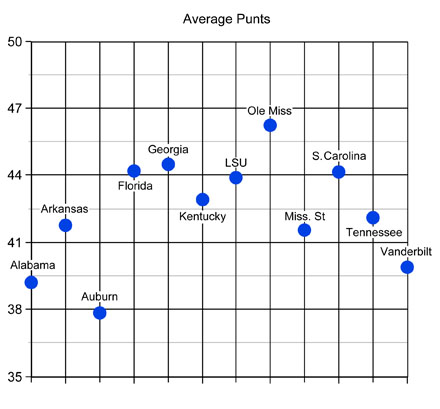 Make no mistake about it, Ole Miss has a kicking game. Bryson Rose booted all but two field goals he attempted last year and Tyler Campbell lead the nation in punting average. Conversely, the punting units for Alabama and Auburn didn't do any favors for their defense last season as both trailed Vanderbilt in the category. The Commodores at least had the excuse of having to boot it away a staggering 88 times - the most in the nation. 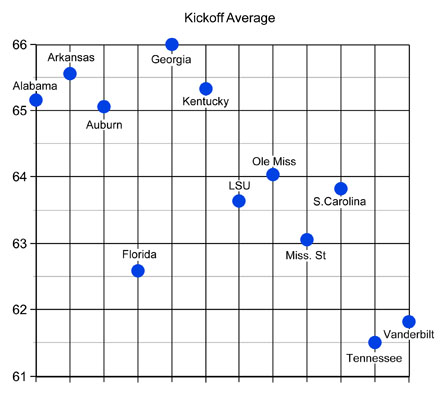 The range of difference in average kickoffs seems small enough - less than five yards - to not really matter except there seems to be a rough inverse relationship between the rankings and opponent kickoff returns. The exception being Georgia. While the prowess of the Bulldog's kicking game is undeniable they were only middle-of-the pack in terms of coverage last season. 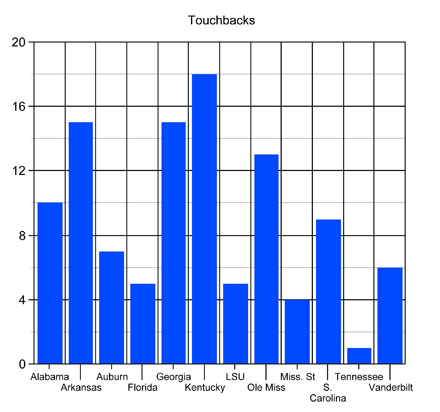 The other element of kickoffs deserving note are touchbacks. This might be an ideal time to note that Arkansas has quietly built a very formidable kicking unit in Fayetteville. Kickoff specialist Alex Tejada kept the Hogs special teams atop the conference rankings. While he graduated the Razorbacks still have some solid legs to rely on. Freshman Zach Hocker rolled up solid numbers on field goals - 7 of 9 from 40+ yards - and was perfect extra points. Dylan Breeding was a beast on punts. Thus endeth the good news... 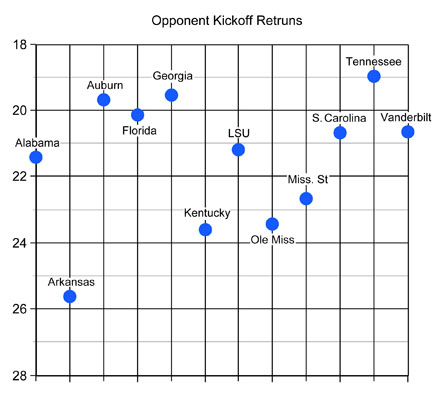 NOTE: This graphic is reversed since this is a defensive statistic. The closer to the top is positive.

Regrettably, the Razobacks didn't reap the benefits of their kickoff expertise due to the woeful production of their coverage team. It wasn't simply the worst in the conference, it was 112th in the nation. Tennessee was another SEC squad who struggled last season that saw a silver lining in special teams. The Vols kickoff coverage was the tenth best in the country in 2010.

The other side of the special teams coin are returns - what your squad can do with the ball once it tumbles from the sky into their possession. And LSU was among the best at turning that turn of events into yardage due to the phenomenal talent of Patrick Peterson. 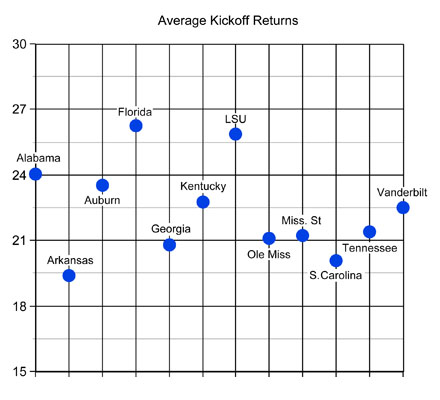 Make no mistake, Peterson will be missed in Baton Rouge on 2011. He didn't just lead the conference in kickoff returns (29.13 yds avg) and punt returns (16.08 yds avg) he was No. 10 and No. 4 in the nation for those categories respectively. Arkansas' prowess on kicks was undermined here as well as the Razorbacks were not just in the conference cellar for kickoff returns, they were 107th in the nation. South Carolina had similar woes, ranking just 11 spots better nationally. 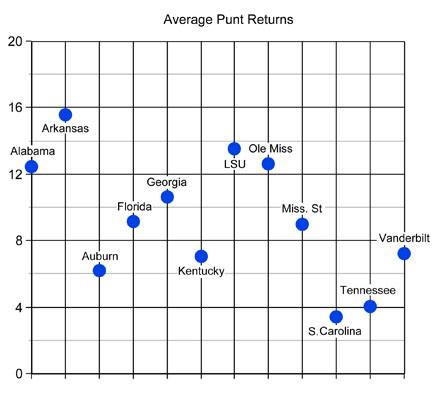 The Hogs redeemed themselves a bit with the strongest punt return unit in the SEC and the fourth-best in the nation. But the Gamecocks kick return futility held solid in this category. Only five teams in college football had more futility turning punts into yards on the ground last season. New special teams coach John Butler has a huge job turning things around but the good news is he has nowhere to go but up.