Ole Miss Learns the Other Side of Houston Nutt // SEC 2011

Share All sharing options for: Ole Miss Learns the Other Side of Houston Nutt // SEC 2011

For the first two years of Houston Nutt's tenure at Ole Miss, when the Rebels were going to Cotton Bowls while the Arkansas Razorbacks missed the postseason or played in lower-ranked bowl games, Mississippi fans had some laughs at the expense of the fans in Fayetteville. Thank you for the coach you couldn't stand; how's that high-flying offense working out for you? 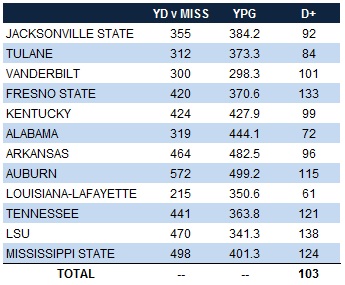 it was Arkansas fans who were laughing. The Houston Nutt they knew and eventually hated showed up in Oxford that year, taking a team that was expected to slip a bit and leading it to a tumble, with a season that started off with a loss to Jacksonville State out of the FCS and ended without a trip to the postseason. Nutt still had something approaching his usual surprise win -- a defeat of a Kentucky team that was probably better than the Rebels -- but otherwise disappointed.

And most of the blame fell on the defense. After all, it had collapsed against Jacksonville State late in the season-beginning, and to an extent ending, upset. And the Rebels allowed more than 400 yards of total offense to Fresno State, Kentucky, Arkansas, Auburn, Tennessee, LSU and Mississippi State.

But the defense wasn't entirely to blame. Using D+ -- a statistic I'm loosely basing on ERA+ (loosely, sabermetricians) -- the defense wasn't all that bad. D+ is based on taking the yardage a team allows to another team in a game and dividing that by the other team's average yardage per game. So a team with a D+ of more than 100 gave up more than the average offensive output of that other team. A team with a D+ of less than 100 did better than might be expected.

The stat isn't flawless -- none is perfect. Having a D+ of 61 against Louisiana-Lafayette, for example, isn't saying much for an SEC team. In fact, it's expected. But it's still a better way of looking at the numbers than just a flat yardage allowed per game or some of the other basic stats. And it can give us some insights.

One thing that would seem to be clear from the D+ is the same kind of trend that Tyrone Nix-run defenses in South Carolina tended to show: Late in the season, with the schedule getting tougher, Nix's defenses fold. Auburn, Tennessee, LSU and Mississippi State -- all bowl teams, including three that went to true New Year's Day games or better.

And the stat appeared to matter to some extent when it came to whether or not the Rebels won. Fresno State was the only team against which Ole Miss hit 100 on D+ and yet won the game anyway.

But the offense was hardly blameless for the collapse. Losses against Alabama and Tennessee both featured fewer than 300 yards in total offense. The Jeremiah Masoli experiment, while perhaps falling somewhere short of abject failure, was also not a rousing success.

The defense, though, certainly did more than its fair share to contribute to the losses. And while fixing it won't entirely turn around Ole Miss' 2011 season, it's hard to see the Rebels having better luck this season if the defense doesn't improve.