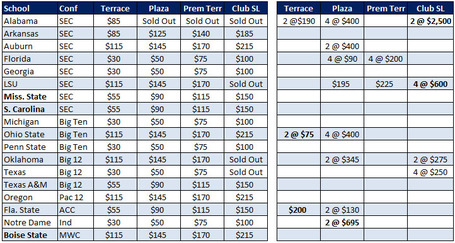 Four months ago we popped over to the Sugar Bowl website and took a gander at their Team Ticket Reservation Marketplace. This is the mechanism by which you can purchase a reservation to buy a ticket to the 2011 BCS National Championship Game for a specific team. If they get in, you get the right to buy your ticket at face value. If they don't, you are out the cash.

There is also a secondary market for the reservations being run by the bowl. So for fans of teams that are especially bullish on their chances, you can see the invisible hand of the market at work. (Or how optimistic an army of remorseless scalpers are anyway)

Anyway, we went back to see what kind of activity has transpired since February and it looks like there's been a little bit of interest. The entries in bold above indicate the new items.

The SEC remains big on their chances for the title game and that goes double for the West Division. With Mississippi State represented that means every team from the division has someone holding reservations with the sole exception of Ole Miss. South Carolina is now up there as well.

Alabama are their usual brand of crazy. The premium club seats sold out in days but now you can finally get 'em on the resale market - at $2,500 a pop. The same seats for LSU have been put up for sale but at the slightly less insane price of $600. Slightly, anyway.

It looks like some Boise State is putting their money where their mouth is and has picked up reservations for the national championship game tix. And the fallout from the Ohio State turmoil this off season has hit the market. They are now the only team with resale reservations going for less than the initial price.