It's natural to expect some drop-off when you have a national championship team that loses several draft picks and some players to graduation. In terms of results, 2010 Alabama is still a lot more likely outcome for a title team than even 2005 Southern Cal, which didn't fall off until the final game against Texas.

So it's not really a surprise that some people are expecting a less-than-stellar season from Auburn this season. What is surprising is just how far that skepticism goes -- so far, in fact, that Phil Steele infamously ranked the Tigers last in the SEC West. Many others, including this blog, expect Auburn to do no better than the lower half of the division.

There are really two reasons for this: Cam Newton and Nick Fairley. But even that somewhat understands and muddies the water. The reason that people are concerned about Auburn this year is largely because Newton will no longer be calling the signals, despite the fact that he was perhaps as important to his team's success as any player in modern college football.

That's not hyperbole. Whatever you think Auburn's record might have been without Newton, it would have been worse. But let's not just talk about how significant the Brink's Truck with a rocket launcher was; let's look at the numbers. 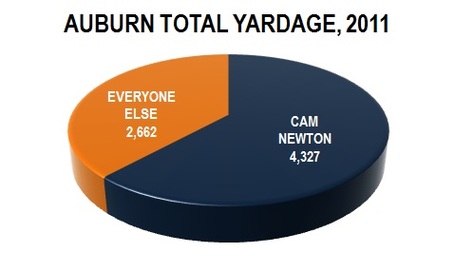 When it comes to the total yardage Auburn gained last year -- 6,989 -- Newton gained 4,327 of those, or about 61.9 percent. That's a shocking number when you think about it; of a touch-back induced 80-yard drive, Newton gained almost 50 of those. That's not to say that Auburn would not have gained some of those yards regardless of the quarterback; the signal-caller who replaced Newton would have completed some passes and run for some yardage in Malzahn's system. But to believe that Auburn could have found another player with a similar combination of throwing and running ability s something approaching delusion. Some of the drives that Auburn turned into touchdowns -- many of them in very close games -- might have ended up as field goals or even punts if Newton hadn't arrived at Auburn.

And speaking of touchdowns ... 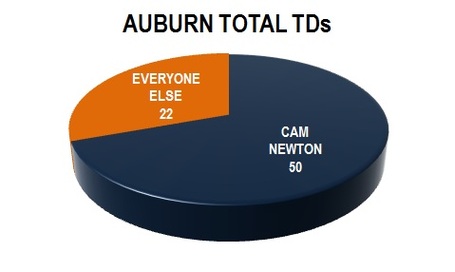 Newton was responsible for 69.4 percent of the touchdowns Auburn scored. Again, you have to take all of these numbers with the caveats that even the worst quarterback will throw some touchdowns and even a Greg McElroy -- not exactly known for his elite running ability -- can scramble for a score. So a replacement quarterback would have also crossed the goal line at least a few times through the air and on the ground. But Newton had the ability to combine those two about as well as anyone we've seen in college football. It's almost as significant a share of offense as some player that used to play for Florida a couple of years ago -- what was that guys' name again? Tim something-or-other, wasn't that it?

Yes, these are Tebow-esque numbers, and then some. The Florida quarterback accounted for 59 percent of his team's yardage and about 60 percent of its touchdowns. If anything, Tebow was a smaller share of his team's offense that Newton was of Auburn's. And we all know what happened to a Florida team that, in fairness, lost a lot of other talent as well. (For those who don't remember, it was an 8-5 team that only competed for the SEC East because of an historic down-year in the division.)

Of course, Newton wasn't the entire team, despite the jokes to the contrary. There is talent at the quarterback position at Auburn, and there might be more on the way. And some of the carries that Newton took last year will go to Michael Dyer and Onterio McCalebb, who aren't exactly chopped liver. Some of those players were in Newton's sizable shadow in 2010; Dyer, for example, ran for 1,093 yards alongside Newton. Those players now have the opportunity to step up, and their careers so far indicate that they might be able to do so.

But they can't replace Newton, at least not to the extent Auburn needs them to in order to compete in the SEC West. Auburn won't be great this year, but they won't necessarily bottom out. Which is what you would expect for a team that lost the overwhelming majority of the offense once its quarterback decided to leave after one historically great season.