Yesterday we took a gander at the ability of SEC offenses to keep drive alive on third downs. Today we'll consider the other side of the ball - what defenses in the conference have been good at getting off the field by preventing third down conversions.

The conference split uniformly by divisions with the SEC West at the top six spots in this category and the SEC West bringing up the rear. And, like yesterday, it was the extremes that prompt the most interesting observations. But first, let's take a gander at the graphic.

Like yesterday, we'll just be looking at the raw percentage since we are wanting a uniform comparison across the conference. Here is the defensive third down conversion percentage for each team in the SEC last season: 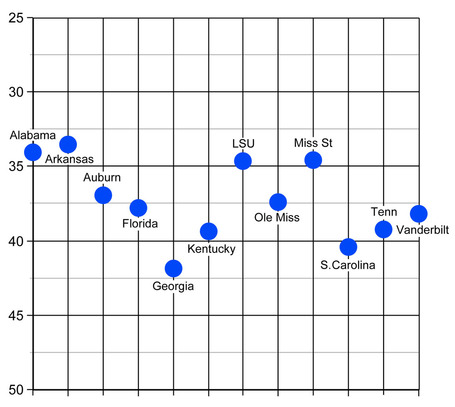 (Keep in mind, the charts are reversed from yesterday. CFB Stats' numbers indicate opponent's third down conversions which, if flipped upside down, show the success of the defense in stopping them. Or, more simply, the closer to the top, the better in all the graphs.)

While there was some befuddlement on my part last week trying to reconcile Georgia's robust turnover margin and lackluster final record, things make a bit more sense now. The Bulldogs were simply horrible at preventing third down conversions last season. More on this after the jump.

On the other hand, if you guessed Arkansas was the best team in the conference for preventing third down conversions last season you'd be lying and don't deny it. Still, the Hogs may have been getting off the field by giving up big third down scoring plays, the Razorback defense finished only 36th in the country.

After the jump we'll look at each team's third down conversion stats over the last five years.

Alabama saw a step back from it's national championship form but remained among the best in the SEC in stopping third down conversions. Arkansas' first place finish in the category flies in the face of the preconception that the Hogs sport a suspect defense. Their strong showing here may be slightly misleading but it is certainly part of a steady increase in defensive efficiency under Bobby Petrino. Auburn, interestingly, has seen a serious decline in the defense's ability to get off the field on third down under Gene Chizik.

NOTE: The initial version of the Georgia graph incorrectly indicated the 2009 figure. It has been corrected.

There isn't much more you need to know about the Bulldogs' season than the graph above. Perhaps the only detail that makes it stranger is that the Dawgs were pretty good stopping third down conversions in Sanford Stadium but simply gawdawful on the road. There could be a slight sliver of silver lining here. Alabama saw a similar defensive collapse in 2007 while transitioning to Nick Saban's 3-4 defense and then experienced a stunning revitalization the season following. 2011 will be year two for Todd Grantham's attempt to make the same change in Athens.

Yesterday we noted how the absence of Tim Tebow lead to an anemia in the Gator's ability to convert third downs on offense, that lassitude was matched on the defensive side of the ball. Florida's 2010 defensive inefficiency was only bested by the Gators' 2007-post-national-championship 9-4 season. And in case you missed it, Kentucky had pretty darn good defense in 2008.

It should be no surpise that LSU is not only one of the most consistent and high scoring teams in this category. The only time the Bayou Bengals finished out of the top four in the SEC in stopping third down conversions was 2008 - which was immediately followed by a change in defensive coordinators.

Ole Miss' woes on third down match their laments in this category on the other side of the ball. Still, it should be noted that the Rebel's ability to get the defense off the field on third downs was the best in the conference - Florida and Alabama tied for second. Like just about every metric we've measured in the past two weeks, Mississippi State has seen a pretty regular progression of improvement under Dan Mullen. How much that continues with the departure of Manny Diaz to Texas remains to be seen.

These three graphs fill me with sad.