Some football maxims are so obvious they seem self evident. To wit: teams that are better at moving the chains have increased chances at putting points on the board. And teams that are successful at doing that on third down are likely to be good at sustaining drives and scoring points.

With that in mind we'll be looking a third down conversion percentages across the SEC today and tomorrow.

There is substantial research that shows a correlation between the third down success and winning percentage but, without delving into the dirty details, there's some controversy of how useful the overall statistic as a predictive indicator. Still, all five BCS bowl winners last January ranked among the nation’s top ten percent for third-down differential. Anecdotally, that's pretty convincing.

For our purposes, we'll just be looking at the raw percentage since the point is to get a comparison across the conference. And here's the offensive third down conversion percentage for each team in the SEC last season: 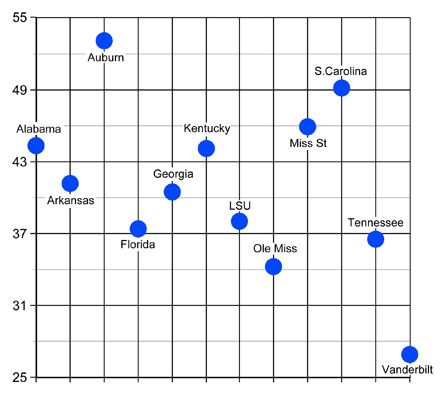 Auburn's 53% third down conversion rate last season was third best in the nation and the best in the SEC over the past half decade. While defenses allegedly win championships, it's hard to argue that the Plainsmen's offense wasn't the key to their bringing the crystal football home from Arizona.

Similarly, even though only seven quarterbacks in the nation threw more interceptions than Stephen Garcia last year, the Gamecock's propensity for converting third downs helped put them at the top of the SEC east.

Vanderbilt, meanwhile, was busy setting dubious standards on the other side of the chart. The Commodores' meager 27% third down conversion percentage was the worst in the conference in the last five years. As much as Auburn is likely to see a bit of regression in 2011, it's almost certain Vandy will have to see some improvement.

After the jump, we'll look at each SEC team's third down conversion statistics since 2006.

While it seems obvious that Cam Newton raised the Auburn offense to another level last seasons, it's still a bit startling to see how much so. Gus Mahlzan may have brought a spark to the Tiger's attack but Newton contribution was pure nitrous oxide. In Fayetteville, Ryan Mallet was busy setting his own host of SEC quarterback records and brought a noticeable bump to the Hogs ability to move the chains on third down as well. The Crimson Tide's Greg McElroy quietly led one of the conference's most efficient third down offenses to little or no fanfare.

Oh, Tebow, where for art thou? The departure of the chosen one for Denver left the Gators without their baby rhino to crush through opposing defensive lines on third down. Add to that an offensive coordinator devoted to the dive that worked so well with Timmy in charge and... well, the results aren't pretty. Georgia maintained the status quo while Kentucky continued it's trend of offensive improvement under Joker Phillips.

LSU's third down success also makes a compelling argument for gigantic quarterbacks. In 2006, Jamarcus Russell battered his way a superb conversion percentage and Ryan Perriloux helped the Tigers to a solid follow-up the next season. After that, the Bayou Bengals have been consistent but firmly in the back half of the conference. Ole Miss, on the other hand, brought in a Parks and Recreation enthusiast from Oregon to rejuvenate the offense and watched their third down conversion percentage wither.

Despite the surge Cam Newton brought to the Auburn offense, the real turnaround story last season was Mississippi State. The Bulldogs improved their third down conversion perctage by better than a third between 2009 and 2010. Unlike Auburn, there is reason to believe Miss. State can maintain the offensive success in 2010. The Bulldogs didn't rely on a single star for their improvement on and damn near the entire offense is returning in the fall.

South Carolina also took a quantum leap forward in 2010 in terms of third down conversions. The Gamecocks had the SEC's worst percentage in 2007 and saw minimal improvement under Stephen Garcia until last season. Whatever clicked did so with a vengeance and USC move from ninth in the conference to second behind only the explosive attack of the Plainsmen. Tennessee, meanwhile, saw a step back in 2010 from the modest step forward under Lane Kiffin in 2009. Vanderbilt brought up the back of the pack with a vengeance that surprised even the most dour prognosticators on the fortunes of the Commodores.