Share All sharing options for: SEC Football and the NCAA's APR Rates

Earlier this week, the NCAA released its Division I Academic Progress Rate (APR) numbers which are the "scorecard" used to measure the classroom performance of the athletic teams of schools in the association. The numbers express a four year rate of the cumulative academic performance for teams of every sport. The method of determining these numbers is pretty arcane and not without controversy but it does establish a single metric to measure programs over time.

Here are a pair of graphs showing the annual multi-year APR rates for every SEC school's football program over the past six seasons (when the APR metric was first introduced). All numbers are from the association's searchable online database. 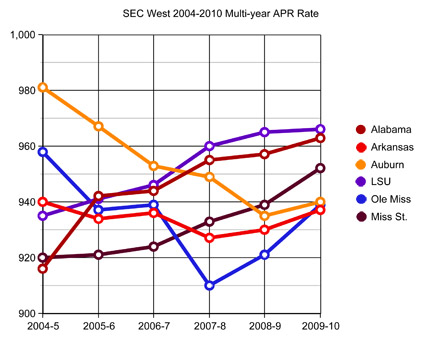 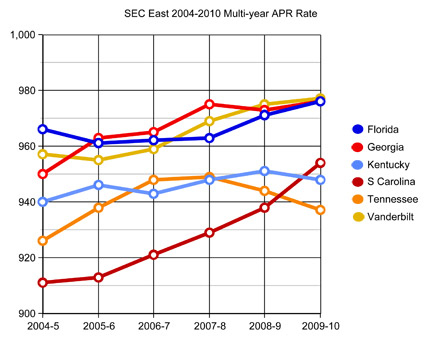 The NCAA also releases reports on head coaches' teams APR standings. These numbers differ somewhat from the team stats since they are measured year-by-year rather than the four-year average. As a result, they are uniformly better than the numbers that produced the charts above. One oddity to the stats. Vanderbilt's Robbie Caldwell wasn't listed but, instead, Bobby Johnson was credited in the database as last year's coach of the Commodores football squad. The chart from last year can be found here. 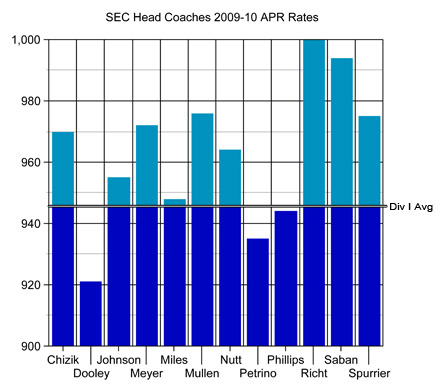