Vanderbilt Has a Down Year, Even by Its Own Standards // SEC 2011

Share All sharing options for: Vanderbilt Has a Down Year, Even by Its Own Standards // SEC 2011

To an extent, it's hard to judge what exactly a "down year" is by Vanderbilt's standards. After all, this is a team that had five winless or one-win SEC seasons during the eight-year tenure of Bobby Johnson, widely regarded as the program's best head coach in years or even decades. When that's the gold standard, you have to look beyond win-loss records to see how a season has gone.

And that's why the only year of the too-short (for bloggers) Robbie Caldwell Era fell woefully short of even the Commodores usual expectations. That's not to blame Caldwell, who took over a team rocked by the death of a recruit and Johnson's surprise summer resignation. But Vanderbilt went from a hiccup in the post-bowl year of 2009 to a collapse in 2010, as evidenced by the margin of defeat in its SEC games. 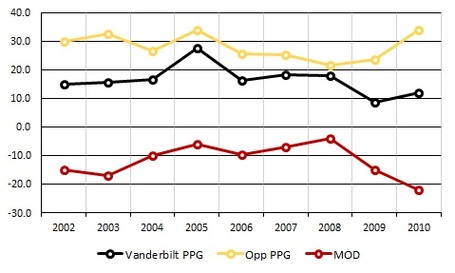 Not to put too fine a point on it, but Caldwell's year at the helm saw the worst average margin of defeat in Nashville and tied for the worst opponents' points per game since Johnson took over in 2002. Combined with the failure to revive the offense -- and remember, Caldwell's an offensive guy -- the fact that opponents could score almost at will left the Commodores without much of a chance.

Sure, Vanderbilt still had the few almost-upsets that seem designed to keep up fans hopes before the team remembers that it's Vanderbilt. South Carolina's 21-7 win in Nashville was particularly harrowing for a team that had lost two of its last three games against the Dores. And Vanderbilt did defeat Ole Miss in the third week of the season.

But for the most part, Vanderbilt was back to being the sure win that could be penciled in for every league team that played them. It wasn't just that Vanderbilt was losing -- the team usually does that -- it's that the Commodores were losing badly, as badly as they had in several years.

The other thing the chart shows is just how large a challenge James Franklin is taking on this year. Not once in the last nine seasons, not even during the "breakout" 4-4 SEC season of 2008, has Vanderbilt outscored its conference opponents. (If you're wondering, Vanderbilt lost its average SEC contest by 3.8 points in 2008.) That might be daunting enough on its own, but Franklin is taking over at the low ebb of the Dores for nearly the last decade. (Nearly because even Caldwell managed to stay within 50 points of Florida, something that eluded Woody Widenhofer in his last season in Nashville.)

The positive spin on all this, of course, is that there's nowhere to go but up. But if you're wondering why Vanderbilt fans feel like 2010 was a lost season, there's your answer. Even by the generous curve on which the Commodores are graded, last year came up well short of expectations.